Is Euronav NV (EURN) A Good Stock To Buy?

Hedge Funds and other institutional investors have just completed filing their 13Fs with the Securities and Exchange Commission, revealing their equity portfolios as of the end of June. At Insider Monkey, we follow nearly 750 active hedge funds and notable investors and by analyzing their 13F filings, we can determine the stocks that they are collectively bullish on. One of their picks is Euronav NV (NYSE:EURN), so let’s take a closer look at the sentiment that surrounds it in the current quarter.

Euronav NV (NYSE:EURN) was in 18 hedge funds’ portfolios at the end of September. EURN shareholders have witnessed an increase in activity from the world’s largest hedge funds recently. There were 16 hedge funds in our database with EURN positions at the end of the previous quarter. Our calculations also showed that EURN isn’t among the 30 most popular stocks among hedge funds (click for Q3 rankings and see the video below for Q2 rankings).

If you’d ask most stock holders, hedge funds are seen as unimportant, outdated financial tools of the past. While there are greater than 8000 funds trading at present, We choose to focus on the masters of this club, around 750 funds. These investment experts control the lion’s share of all hedge funds’ total asset base, and by keeping an eye on their top equity investments, Insider Monkey has unearthed numerous investment strategies that have historically exceeded Mr. Market. Insider Monkey’s flagship short hedge fund strategy exceeded the S&P 500 short ETFs by around 20 percentage points a year since its inception in May 2014. Our portfolio of short stocks lost 27.8% since February 2017 (through November 21st) even though the market was up more than 39% during the same period. We just shared a list of 7 short targets in our latest quarterly update .

We leave no stone unturned when looking for the next great investment idea. For example Europe is set to become the world’s largest cannabis market, so we check out this European marijuana stock pitch. One of the most bullish analysts in America just put his money where his mouth is. He says, “I’m investing more today than I did back in early 2009.” So we check out his pitch. We read hedge fund investor letters and listen to stock pitches at hedge fund conferences. We also rely on the best performing hedge funds‘ buy/sell signals. Let’s take a glance at the latest hedge fund action regarding Euronav NV (NYSE:EURN).

What does smart money think about Euronav NV (NYSE:EURN)? 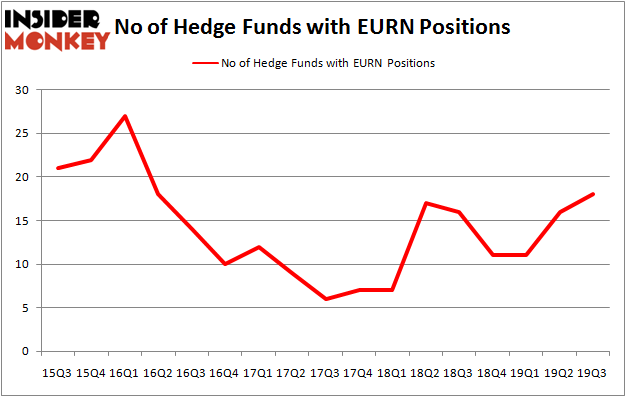 According to Insider Monkey’s hedge fund database, Oaktree Capital Management, managed by Howard Marks, holds the largest position in Euronav NV (NYSE:EURN). Oaktree Capital Management has a $69.9 million position in the stock, comprising 1.4% of its 13F portfolio. The second most bullish fund manager is QVT Financial, led by Daniel Gold, holding a $16.9 million position; 3.5% of its 13F portfolio is allocated to the stock. Some other hedge funds and institutional investors that are bullish comprise Renaissance Technologies, Crispin Odey’s Odey Asset Management Group and Paul Marshall and Ian Wace’s Marshall Wace. In terms of the portfolio weights assigned to each position GeoSphere Capital Management allocated the biggest weight to Euronav NV (NYSE:EURN), around 3.87% of its 13F portfolio. QVT Financial is also relatively very bullish on the stock, designating 3.47 percent of its 13F equity portfolio to EURN.

As one would reasonably expect, key hedge funds were leading the bulls’ herd. Wexford Capital, managed by Charles Davidson and Joseph Jacobs, assembled the biggest position in Euronav NV (NYSE:EURN). Wexford Capital had $2.6 million invested in the company at the end of the quarter. Arvind Sanger’s GeoSphere Capital Management also initiated a $0.5 million position during the quarter. The only other fund with a brand new EURN position is Gavin Saitowitz and Cisco J. del Valle’s Springbok Capital.

As you can see these stocks had an average of 19.75 hedge funds with bullish positions and the average amount invested in these stocks was $194 million. That figure was $138 million in EURN’s case. Asbury Automotive Group, Inc. (NYSE:ABG) is the most popular stock in this table. On the other hand Cannae Holdings, Inc. (NYSE:CNNE) is the least popular one with only 19 bullish hedge fund positions. Compared to these stocks Euronav NV (NYSE:EURN) is even less popular than CNNE. Hedge funds clearly dropped the ball on EURN as the stock delivered strong returns, though hedge funds’ consensus picks still generated respectable returns. Our calculations showed that top 20 most popular stocks among hedge funds returned 37.4% in 2019 through the end of November and outperformed the S&P 500 ETF (SPY) by 9.9 percentage points. A small number of hedge funds were also right about betting on EURN as the stock returned 18% during the fourth quarter (through the end of November) and outperformed the market by an even larger margin.