Is E*TRADE Financial Corp (ETFC) A Good Stock To Buy?

We started seeing tectonic shifts in the market during the third quarter. Small-cap stocks underperformed the large-cap stocks by more than 10 percentage points between the end of June 2015 and the end of June 2016. A mean reversion in trends bumped small-cap stocks’ return to almost 9% in Q3, outperforming their large-cap peers by 5 percentage points. The momentum in small-cap space hasn’t subsided during this quarter either. Small-cap stocks beat large-cap stocks by another 5 percentage points during the first 7 weeks of this quarter. Hedge funds and institutional investors tracked by Insider Monkey usually invest a disproportionate amount of their portfolios in smaller cap stocks. We have been receiving indications that hedge funds were boosting their overall exposure and this is one of the factors behind the recent movements in major indices. In this article, we will take a closer look at hedge fund sentiment towards E*TRADE Financial Corp (NASDAQ:ETFC) .

E*TRADE Financial Corp (NASDAQ:ETFC) has experienced a decrease in enthusiasm from smart money of late. ETFC was in 34 hedge funds’ portfolios at the end of September. There were 35 hedge funds in our database with ETFC holdings at the end of the previous quarter. The level and the change in hedge fund popularity aren’t the only variables you need to analyze to decipher hedge funds’ perspectives. A stock may witness a boost in popularity but it may still be less popular than similarly priced stocks. That’s why at the end of this article we will examine companies such as Everest Re Group Ltd (NYSE:RE), Msci Inc (NYSE:MSCI), and Michael Kors Holdings Ltd (NYSE:KORS) to gather more data points.

With all of this in mind, let’s view the recent action encompassing E*TRADE Financial Corp (NASDAQ:ETFC).

How have hedgies been trading E*TRADE Financial Corp (NASDAQ:ETFC)?

At Q3’s end, a total of 34 of the hedge funds tracked by Insider Monkey held long positions in this stock, a drop of 3% from the second quarter of 2016. On the other hand, there were a total of 48 hedge funds with a bullish position in ETFC at the beginning of this year. With hedgies’ capital changing hands, there exists a select group of key hedge fund managers who were increasing their stakes meaningfully (or already accumulated large positions). 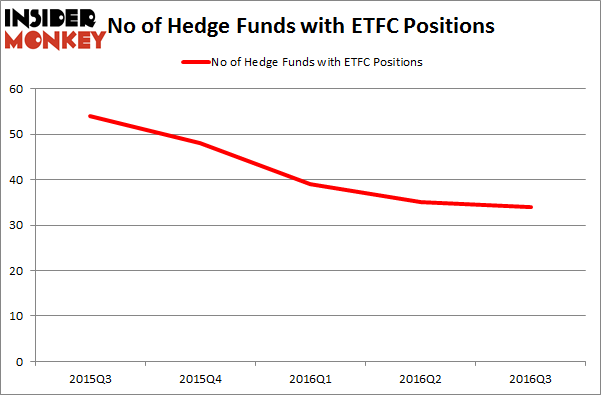 Of the funds tracked by Insider Monkey, Ken Griffin’s Citadel Investment Group has the number one position in E*TRADE Financial Corp (NASDAQ:ETFC), worth close to $214.5 million, accounting for 0.2% of its total 13F portfolio. The second largest stake is held by Southpoint Capital Advisors, led by John Smith Clark, which holds a $170.4 million position; 7.6% of its 13F portfolio is allocated to the company. Some other professional money managers that hold long positions encompass Glenn J. Krevlin’s Glenhill Advisors, Israel Englander’s Millennium Management and Alan Fournier’s Pennant Capital Management. We should note that none of these hedge funds are among our list of the 100 best performing hedge funds which is based on the performance of their 13F long positions in non-microcap stocks.