Is Equity Commonwealth (EQC) A Good Stock To Buy?

The latest 13F reporting period has come and gone, and Insider Monkey is again at the forefront when it comes to making use of this gold mine of data. We have processed the filings of the more than 700 world-class investment firms that we track and now have access to the collective wisdom contained in these filings, which are based on their June 28 holdings, data that is available nowhere else. Should you consider Equity Commonwealth (NYSE:EQC) for your portfolio? We’ll look to this invaluable collective wisdom for the answer.

Equity Commonwealth (NYSE:EQC) was in 20 hedge funds’ portfolios at the end of June. EQC has experienced a decrease in support from the world’s most elite money managers of late. There were 21 hedge funds in our database with EQC holdings at the end of the previous quarter. Our calculations also showed that EQC isn’t among the 30 most popular stocks among hedge funds (view the video below).

In the financial world there are many signals market participants employ to value stocks. A pair of the less utilized signals are hedge fund and insider trading interest. We have shown that, historically, those who follow the top picks of the elite fund managers can outclass the broader indices by a solid margin (see the details here). 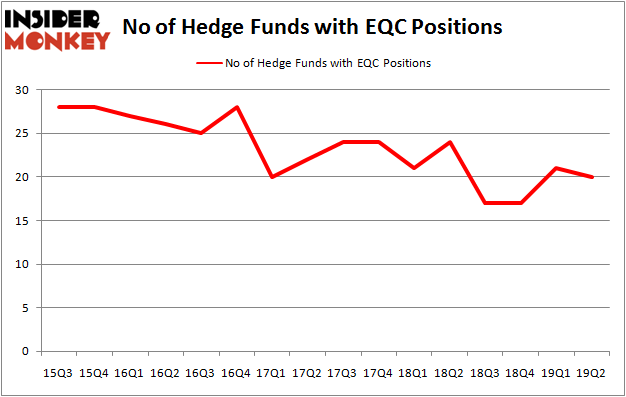 How have hedgies been trading Equity Commonwealth (NYSE:EQC)?

More specifically, Renaissance Technologies was the largest shareholder of Equity Commonwealth (NYSE:EQC), with a stake worth $54.2 million reported as of the end of March. Trailing Renaissance Technologies was Hudson Way Capital Management, which amassed a stake valued at $31 million. Arrowstreet Capital, D E Shaw, and Cove Street Capital were also very fond of the stock, giving the stock large weights in their portfolios.

Due to the fact that Equity Commonwealth (NYSE:EQC) has witnessed declining sentiment from the aggregate hedge fund industry, it’s easy to see that there was a specific group of hedge funds that elected to cut their full holdings in the second quarter. At the top of the heap, Michael Gelband’s ExodusPoint Capital said goodbye to the biggest position of all the hedgies followed by Insider Monkey, totaling close to $0.7 million in stock. Paul Marshall and Ian Wace’s fund, Marshall Wace LLP, also said goodbye to its stock, about $0.7 million worth. These moves are important to note, as aggregate hedge fund interest was cut by 1 funds in the second quarter.

As you can see these stocks had an average of 19.5 hedge funds with bullish positions and the average amount invested in these stocks was $275 million. That figure was $197 million in EQC’s case. MasTec, Inc. (NYSE:MTZ) is the most popular stock in this table. On the other hand Copa Holdings, S.A. (NYSE:CPA) is the least popular one with only 16 bullish hedge fund positions. Equity Commonwealth (NYSE:EQC) is not the most popular stock in this group but hedge fund interest is still above average. Our calculations showed that top 20 most popular stocks among hedge funds returned 24.4% in 2019 through September 30th and outperformed the S&P 500 ETF (SPY) by 4 percentage points. Hedge funds were also right about betting on EQC, though not to the same extent, as the stock returned 5.3% during the third quarter and outperformed the market as well.