Is EOG Resources Inc (EOG) A Good Stock To Buy?

Many investors, including Paul Tudor Jones or Stan Druckenmiller, have been saying for a while now that the current market is overvalued due to a low interest rate environment that leads to companies swapping their equity for debt and focusing mostly on short-term performance such as beating the quarterly earnings estimates. In the fourth quarter, many investors lost money due to unpredictable events such as the sudden increase in long-term interest rates and unintended consequences of the trade war with China. Nevertheless, many of the stocks that tanked in the third quarter still sport strong fundamentals and their decline was more related to the general market sentiment rather than their individual performance and hedge funds kept their bullish stance. In this article we will find out how hedge fund sentiment to EOG Resources Inc (NYSE:EOG) changed recently.

EOG Resources Inc (NYSE:EOG) was in 37 hedge funds’ portfolios at the end of September. EOG shareholders have witnessed an increase in activity from the world’s largest hedge funds of late. There were 30 hedge funds in our database with EOG positions at the end of the previous quarter. Our calculations also showed that eog isn’t among the 30 most popular stocks among hedge funds.

If you’d ask most shareholders, hedge funds are perceived as worthless, old financial vehicles of the past. While there are more than 8,000 funds in operation at the moment, Our researchers look at the masters of this group, around 700 funds. These money managers administer the lion’s share of all hedge funds’ total capital, and by monitoring their highest performing stock picks, Insider Monkey has revealed various investment strategies that have historically outperformed the S&P 500 index. Insider Monkey’s flagship hedge fund strategy outrun the S&P 500 index by 6 percentage points annually since its inception in May 2014 through early November 2018. We were able to generate large returns even by identifying short candidates. Our portfolio of short stocks lost 24% since February 2017 (through December 3rd) even though the market was up nearly 23% during the same period. We just shared a list of 11 short targets in our latest quarterly update.

At the end of the third quarter, a total of 37 of the hedge funds tracked by Insider Monkey were long this stock, a change of 23% from one quarter earlier. By comparison, 39 hedge funds held shares or bullish call options in EOG heading into this year. With hedgies’ sentiment swirling, there exists an “upper tier” of key hedge fund managers who were adding to their holdings considerably (or already accumulated large positions). 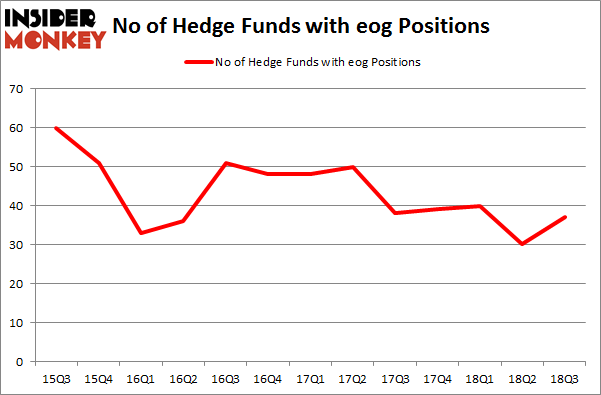 The largest stake in EOG Resources Inc (NYSE:EOG) was held by Millennium Management, which reported holding $154.8 million worth of stock at the end of September. It was followed by D E Shaw with a $125.5 million position. Other investors bullish on the company included Arrowstreet Capital, Renaissance Technologies, and AQR Capital Management.

As one would reasonably expect, some big names have been driving this bullishness. Renaissance Technologies, managed by Jim Simons, established the largest position in EOG Resources Inc (NYSE:EOG). Renaissance Technologies had $79.4 million invested in the company at the end of the quarter. John Overdeck and David Siegel’s Two Sigma Advisors also initiated a $40.3 million position during the quarter. The other funds with new positions in the stock are Ken Heebner’s Capital Growth Management, Jeffrey Talpins’s Element Capital Management, and Louis Bacon’s Moore Global Investments.

Let’s also examine hedge fund activity in other stocks – not necessarily in the same industry as EOG Resources Inc (NYSE:EOG) but similarly valued. We will take a look at The Bank of Nova Scotia (NYSE:BNS), Walgreens Boots Alliance Inc (NASDAQ:WBA), Ambev SA (NYSE:ABEV), and Anthem Inc (NYSE:ANTM). This group of stocks’ market values are similar to EOG’s market value.

As you can see these stocks had an average of 30.5 hedge funds with bullish positions and the average amount invested in these stocks was $2.18 billion. That figure was $952 million in EOG’s case. Anthem Inc (NYSE:ANTM) is the most popular stock in this table. On the other hand The Bank of Nova Scotia (NYSE:BNS) is the least popular one with only 11 bullish hedge fund positions. EOG Resources Inc (NYSE:EOG) is not the most popular stock in this group but hedge fund interest is still above average. This is a slightly positive signal but we’d rather spend our time researching stocks that hedge funds are piling on. In this regard ANTM might be a better candidate to consider a long position.