Is Envestnet Inc (ENV) A Good Stock To Buy?

At Insider Monkey, we pore over the filings of nearly 750 top investment firms every quarter, a process we have now completed for the latest reporting period. The data we’ve gathered as a result gives us access to a wealth of collective knowledge based on these firms’ portfolio holdings as of September 30. In this article, we will use that wealth of knowledge to determine whether or not Envestnet Inc (NYSE:ENV) makes for a good investment right now.

Envestnet Inc (NYSE:ENV) shares haven’t seen a lot of action during the third quarter. Overall, hedge fund sentiment was unchanged. The stock was in 13 hedge funds’ portfolios at the end of the third quarter of 2019. At the end of this article we will also compare ENV to other stocks including Telephone & Data Systems, Inc. (NYSE:TDS), Navient Corp (NASDAQ:NAVI), and Apollo Commercial Real Est. Finance Inc (NYSE:ARI) to get a better sense of its popularity.

We leave no stone unturned when looking for the next great investment idea. For example Europe is set to become the world’s largest cannabis market, so we check out this European marijuana stock pitch. One of the most bullish analysts in America just put his money where his mouth is. He says, “I’m investing more today than I did back in early 2009.” So we check out his pitch. We read hedge fund investor letters and listen to stock pitches at hedge fund conferences. We also rely on the best performing hedge funds‘ buy/sell signals. We’re going to view the fresh hedge fund action encompassing Envestnet Inc (NYSE:ENV).

What have hedge funds been doing with Envestnet Inc (NYSE:ENV)?

At Q3’s end, a total of 13 of the hedge funds tracked by Insider Monkey were bullish on this stock, a change of 0% from the second quarter of 2019. On the other hand, there were a total of 13 hedge funds with a bullish position in ENV a year ago. With hedge funds’ capital changing hands, there exists an “upper tier” of notable hedge fund managers who were upping their holdings meaningfully (or already accumulated large positions). 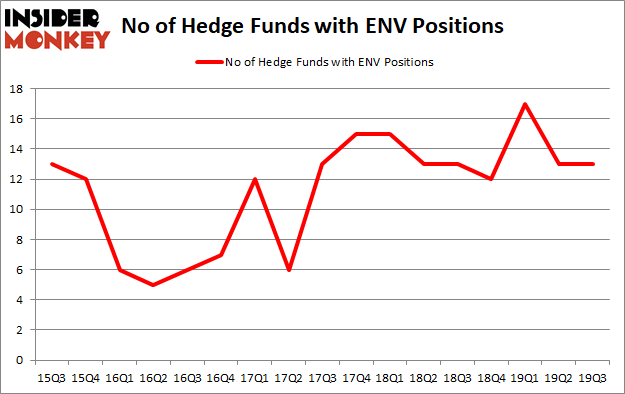 Since Envestnet Inc (NYSE:ENV) has witnessed falling interest from the smart money, it’s safe to say that there exists a select few fund managers that elected to cut their entire stakes in the third quarter. Intriguingly, Ram Seshan Venkateswaran’s Vernier Capital dumped the biggest position of the 750 funds followed by Insider Monkey, comprising an estimated $4.7 million in stock, and Dmitry Balyasny’s Balyasny Asset Management was right behind this move, as the fund said goodbye to about $3.9 million worth. These bearish behaviors are important to note, as aggregate hedge fund interest stayed the same (this is a bearish signal in our experience).

As you can see these stocks had an average of 19.75 hedge funds with bullish positions and the average amount invested in these stocks was $220 million. That figure was $64 million in ENV’s case. Navient Corp (NASDAQ:NAVI) is the most popular stock in this table. On the other hand Apollo Commercial Real Est. Finance Inc (NYSE:ARI) is the least popular one with only 9 bullish hedge fund positions. Envestnet Inc (NYSE:ENV) is not the least popular stock in this group but hedge fund interest is still below average. Our calculations showed that top 20 most popular stocks among hedge funds returned 37.4% in 2019 through the end of November and outperformed the S&P 500 ETF (SPY) by 9.9 percentage points. A small number of hedge funds were also right about betting on ENV as the stock returned 25.6% during the first two months of Q4 and outperformed the market by an even larger margin.