Is Enstar Group Ltd. (ESGR) A Good Stock To Buy ?

Hedge funds are not perfect. They have their bad picks just like everyone else. Facebook, a stock hedge funds have loved, lost nearly 40% of its value at one point in 2018. Although hedge funds are not perfect, their consensus picks do deliver solid returns, however. Our data show the top 15 S&P 500 stocks among hedge funds at the end of December 2018 yielded an average return of 19.7% year-to-date, vs. a gain of 13.1% for the S&P 500 Index. Because hedge funds have a lot of resources and their consensus picks do well, we pay attention to what they think. In this article, we analyze what the elite funds think of Enstar Group Ltd. (NASDAQ:ESGR).

Enstar Group Ltd. (NASDAQ:ESGR) shareholders have witnessed a decrease in activity from the world’s largest hedge funds of late. ESGR was in 9 hedge funds’ portfolios at the end of the fourth quarter of 2018. There were 10 hedge funds in our database with ESGR positions at the end of the previous quarter. Our calculations also showed that ESGR isn’t among the 30 most popular stocks among hedge funds.

At Q4’s end, a total of 9 of the hedge funds tracked by Insider Monkey held long positions in this stock, a change of -10% from the previous quarter. Below, you can check out the change in hedge fund sentiment towards ESGR over the last 14 quarters. With hedge funds’ capital changing hands, there exists a few noteworthy hedge fund managers who were adding to their holdings substantially (or already accumulated large positions). 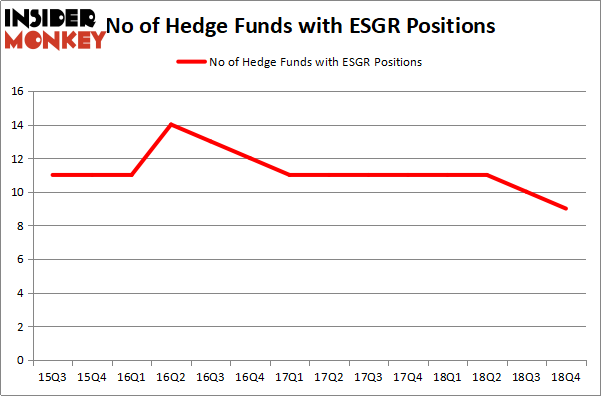 Because Enstar Group Ltd. (NASDAQ:ESGR) has witnessed falling interest from the aggregate hedge fund industry, logic holds that there exists a select few fund managers that elected to cut their full holdings heading into Q3. Interestingly, Ron Bobman’s Capital Returns Management sold off the biggest investment of all the hedgies watched by Insider Monkey, valued at about $0.7 million in stock, and J. Alan Reid, Jr.’s Forward Management was right behind this move, as the fund cut about $0.3 million worth. These transactions are interesting, as total hedge fund interest fell by 1 funds heading into Q3.

As you can see these stocks had an average of 15 hedge funds with bullish positions and the average amount invested in these stocks was $129 million. That figure was $498 million in ESGR’s case. Rayonier Inc. (NYSE:RYN) is the most popular stock in this table. On the other hand PS Business Parks Inc (NYSE:PSB) is the least popular one with only 12 bullish hedge fund positions. Compared to these stocks Enstar Group Ltd. (NASDAQ:ESGR) is even less popular than PSB. Hedge funds dodged a bullet by taking a bearish stance towards ESGR. Our calculations showed that the top 15 most popular hedge fund stocks returned 24.2% through April 22nd and outperformed the S&P 500 ETF (SPY) by more than 7 percentage points. Unfortunately ESGR wasn’t nearly as popular as these 15 stock (hedge fund sentiment was very bearish); ESGR investors were disappointed as the stock returned 5.9% and underperformed the market. If you are interested in investing in large cap stocks with huge upside potential, you should check out the top 15 most popular stocks) among hedge funds as 13 of these stocks already outperformed the market this year.