Is Elbit Systems Ltd. (ESLT) A Good Stock To Buy ?

The latest 13F reporting period has come and gone, and Insider Monkey is again at the forefront when it comes to making use of this gold mine of data. We at Insider Monkey have gone over 730 13F filings that hedge funds and well-known value investors are required to file by the SEC. The 13F filings show the funds’ and investors’ portfolio positions as of June 28th. In this article we look at what those investors think of Elbit Systems Ltd. (NASDAQ:ESLT).

Elbit Systems Ltd. (NASDAQ:ESLT) shareholders have witnessed an increase in activity from the world’s largest hedge funds lately. ESLT was in 5 hedge funds’ portfolios at the end of June. There were 2 hedge funds in our database with ESLT holdings at the end of the previous quarter. Our calculations also showed that ESLT isn’t among the 30 most popular stocks among hedge funds (view the video below).

According to most investors, hedge funds are assumed to be worthless, old investment vehicles of yesteryear. While there are more than 8000 funds in operation at present, Our researchers look at the masters of this club, around 750 funds. Most estimates calculate that this group of people oversee bulk of all hedge funds’ total capital, and by keeping an eye on their first-class stock picks, Insider Monkey has formulated numerous investment strategies that have historically exceeded Mr. Market. Insider Monkey’s flagship hedge fund strategy beat the S&P 500 index by around 5 percentage points annually since its inception in May 2014. We were able to generate large returns even by identifying short candidates. Our portfolio of short stocks lost 25.7% since February 2017 (through September 30th) even though the market was up more than 33% during the same period. We just shared a list of 10 short targets in our latest quarterly update . 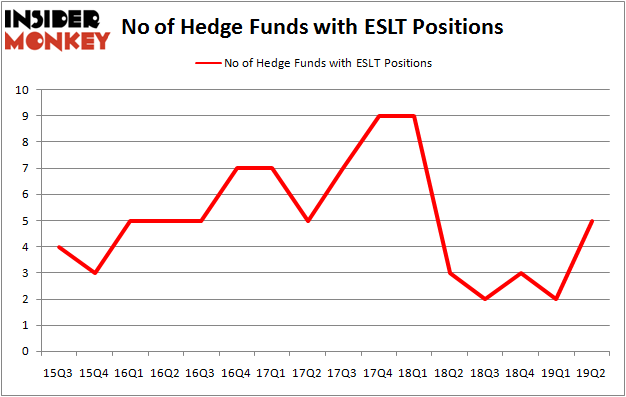 Unlike some fund managers who are betting on Dow reaching 40000 in a year, our long-short investment strategy doesn’t rely on bull markets to deliver double digit returns. We only rely on hedge fund buy/sell signals. We’re going to take a peek at the fresh hedge fund action encompassing Elbit Systems Ltd. (NASDAQ:ESLT).

What have hedge funds been doing with Elbit Systems Ltd. (NASDAQ:ESLT)?

More specifically, Renaissance Technologies was the largest shareholder of Elbit Systems Ltd. (NASDAQ:ESLT), with a stake worth $15.2 million reported as of the end of March. Trailing Renaissance Technologies was Millennium Management, which amassed a stake valued at $3 million. D E Shaw, ExodusPoint Capital, and Arrowstreet Capital were also very fond of the stock, giving the stock large weights in their portfolios.

As one would reasonably expect, some big names have been driving this bullishness. Millennium Management, managed by Israel Englander, established the most outsized position in Elbit Systems Ltd. (NASDAQ:ESLT). Millennium Management had $3 million invested in the company at the end of the quarter. Michael Gelband’s ExodusPoint Capital also made a $0.3 million investment in the stock during the quarter. The only other fund with a brand new ESLT position is Peter Rathjens, Bruce Clarke and John Campbell’s Arrowstreet Capital.

As you can see these stocks had an average of 23.25 hedge funds with bullish positions and the average amount invested in these stocks was $641 million. That figure was $19 million in ESLT’s case. GCI Liberty, Inc. (NASDAQ:GLIBA) is the most popular stock in this table. On the other hand Logitech International SA (NASDAQ:LOGI) is the least popular one with only 16 bullish hedge fund positions. Compared to these stocks Elbit Systems Ltd. (NASDAQ:ESLT) is even less popular than LOGI. Hedge funds clearly dropped the ball on ESLT as the stock delivered strong returns, though hedge funds’ consensus picks still generated respectable returns. Our calculations showed that top 20 most popular stocks among hedge funds returned 24.4% in 2019 through September 30th and outperformed the S&P 500 ETF (SPY) by 4 percentage points. A small number of hedge funds were also right about betting on ESLT as the stock returned 10.5% during the third quarter and outperformed the market by an even larger margin.