Is Elanco Animal Health Incorporated (NYSE:ELAN) a good investment right now? We check hedge fund and billionaire investor sentiment before delving into hours of research. Hedge funds spend millions of dollars on Ivy League graduates, expert networks, and get tips from investment bankers and industry insiders. Sure they sometimes fail miserably, but their consensus stock picks historically outperformed the market after adjusting for known risk factors.

Is Elanco Animal Health Incorporated (NYSE:ELAN) worth your attention right now? The best stock pickers are selling. The number of long hedge fund bets went down by 6 recently. Our calculations also showed that ELAN isn’t among the 30 most popular stocks among hedge funds (view the video below). ELAN was in 27 hedge funds’ portfolios at the end of the second quarter of 2019. There were 33 hedge funds in our database with ELAN positions at the end of the previous quarter.

To the average investor there are numerous indicators market participants use to appraise their stock investments. A duo of the best indicators are hedge fund and insider trading sentiment. We have shown that, historically, those who follow the top picks of the best fund managers can outpace the market by a healthy amount (see the details here). 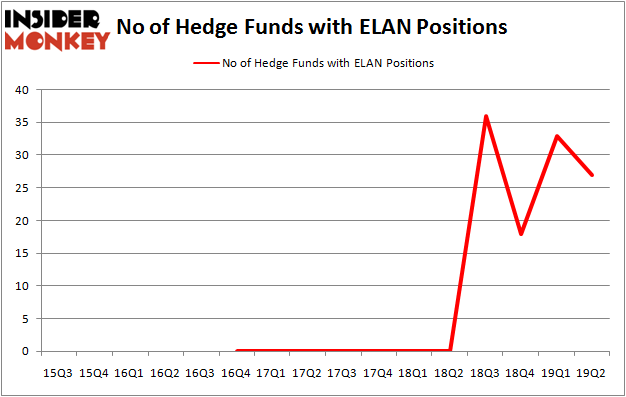 Unlike some fund managers who are betting on Dow reaching 40000 in a year, our long-short investment strategy doesn’t rely on bull markets to deliver double digit returns. We only rely on hedge fund buy/sell signals. We’re going to go over the new hedge fund action surrounding Elanco Animal Health Incorporated (NYSE:ELAN).

How have hedgies been trading Elanco Animal Health Incorporated (NYSE:ELAN)?

At Q2’s end, a total of 27 of the hedge funds tracked by Insider Monkey were long this stock, a change of -18% from one quarter earlier. By comparison, 0 hedge funds held shares or bullish call options in ELAN a year ago. With hedgies’ sentiment swirling, there exists a select group of key hedge fund managers who were upping their stakes meaningfully (or already accumulated large positions).

More specifically, Laurion Capital Management was the largest shareholder of Elanco Animal Health Incorporated (NYSE:ELAN), with a stake worth $137.2 million reported as of the end of March. Trailing Laurion Capital Management was Healthcor Management LP, which amassed a stake valued at $97.3 million. Citadel Investment Group, D E Shaw, and Clearfield Capital were also very fond of the stock, giving the stock large weights in their portfolios.

Since Elanco Animal Health Incorporated (NYSE:ELAN) has witnessed a decline in interest from the entirety of the hedge funds we track, we can see that there was a specific group of money managers who were dropping their positions entirely heading into Q3. Intriguingly, Michael A. Price and Amos Meron’s Empyrean Capital Partners dumped the largest position of all the hedgies monitored by Insider Monkey, valued at about $79.3 million in stock, and Michael Platt and William Reeves’s BlueCrest Capital Mgmt. was right behind this move, as the fund cut about $76.8 million worth. These transactions are interesting, as aggregate hedge fund interest fell by 6 funds heading into Q3.

As you can see these stocks had an average of 37.25 hedge funds with bullish positions and the average amount invested in these stocks was $1591 million. That figure was $520 million in ELAN’s case. Ally Financial Inc (NYSE:ALLY) is the most popular stock in this table. On the other hand Textron Inc. (NYSE:TXT) is the least popular one with only 23 bullish hedge fund positions. Elanco Animal Health Incorporated (NYSE:ELAN) is not the least popular stock in this group but hedge fund interest is still below average. This is a slightly negative signal and we’d rather spend our time researching stocks that hedge funds are piling on. Our calculations showed that top 20 most popular stocks among hedge funds returned 24.4% in 2019 through September 30th and outperformed the S&P 500 ETF (SPY) by 4 percentage points. Unfortunately ELAN wasn’t nearly as popular as these 20 stocks (hedge fund sentiment was quite bearish); ELAN investors were disappointed as the stock returned -21.3% during the third quarter and underperformed the market. If you are interested in investing in large cap stocks with huge upside potential, you should check out the top 20 most popular stocks among hedge funds as many of these stocks already outperformed the market so far in 2019.