Is Editas Medicine, Inc. (EDIT) A Good Stock To Buy?

Hedge Funds and other institutional investors have just completed filing their 13Fs with the Securities and Exchange Commission, revealing their equity portfolios as of the end of December. At Insider Monkey, we follow nearly 750 active hedge funds and notable investors and by analyzing their 13F filings, we can determine the stocks that they are collectively bullish on. One of their picks is Editas Medicine, Inc. (NASDAQ:EDIT), so let’s take a closer look at the sentiment that surrounds it in the current quarter.

Is Editas Medicine, Inc. (NASDAQ:EDIT) a first-rate investment right now? The smart money is turning bullish. The number of long hedge fund bets went up by 1 recently. Our calculations also showed that edit isn’t among the 30 most popular stocks among hedge funds. EDIT was in 18 hedge funds’ portfolios at the end of the fourth quarter of 2018. There were 17 hedge funds in our database with EDIT holdings at the end of the previous quarter. 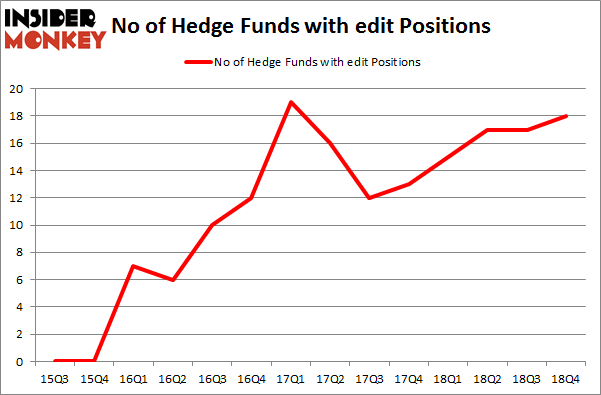 More specifically, Deerfield Management was the largest shareholder of Editas Medicine, Inc. (NASDAQ:EDIT), with a stake worth $26.4 million reported as of the end of December. Trailing Deerfield Management was Viking Global, which amassed a stake valued at $21.2 million. Casdin Capital, D E Shaw, and Valiant Capital were also very fond of the stock, giving the stock large weights in their portfolios.