Is Eastman Chemical Company (EMN) A Good Stock To Buy?

Does Eastman Chemical Company (NYSE:EMN) represent a good buying opportunity at the moment? Let’s quickly check the hedge fund interest towards the company. Hedge fund firms constantly search out bright intellectuals and highly-experienced employees and throw away millions of dollars on satellite photos and other research activities, so it is no wonder why they tend to generate millions in profits each year. It is also true that some hedge fund players fail inconceivably on some occasions, but net net their stock picks have been generating superior risk-adjusted returns on average over the years.

Eastman Chemical Company (NYSE:EMN) was in 30 hedge funds’ portfolios at the end of March. EMN investors should be aware of a decrease in activity from the world’s largest hedge funds lately. There were 33 hedge funds in our database with EMN holdings at the end of the previous quarter. Our calculations also showed that EMN isn’t among the 30 most popular stocks among hedge funds.

At Q1’s end, a total of 30 of the hedge funds tracked by Insider Monkey were long this stock, a change of -9% from the fourth quarter of 2018. Below, you can check out the change in hedge fund sentiment towards EMN over the last 15 quarters. With hedgies’ capital changing hands, there exists a select group of noteworthy hedge fund managers who were adding to their holdings substantially (or already accumulated large positions). 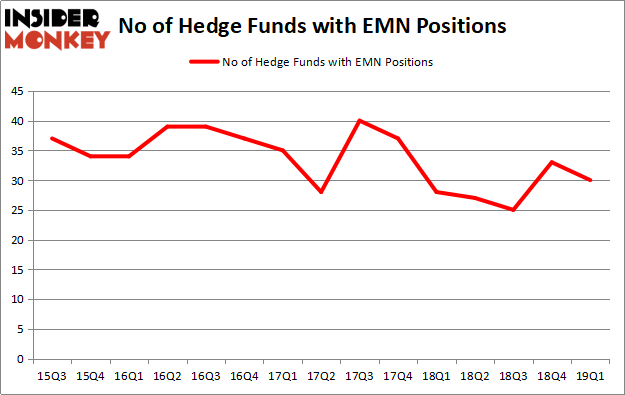 Among these funds, Citadel Investment Group held the most valuable stake in Eastman Chemical Company (NYSE:EMN), which was worth $103.4 million at the end of the first quarter. On the second spot was Diamond Hill Capital which amassed $94.8 million worth of shares. Moreover, Atlantic Investment Management, AQR Capital Management, and Bridgewater Associates were also bullish on Eastman Chemical Company (NYSE:EMN), allocating a large percentage of their portfolios to this stock.

Judging by the fact that Eastman Chemical Company (NYSE:EMN) has faced a decline in interest from the entirety of the hedge funds we track, we can see that there were a few fund managers who sold off their entire stakes last quarter. Intriguingly, Ryan Caldwell’s Chiron Investment Management sold off the largest stake of all the hedgies monitored by Insider Monkey, worth about $18.5 million in stock. David Costen Haley’s fund, HBK Investments, also dropped its stock, about $9.7 million worth. These bearish behaviors are intriguing to say the least, as total hedge fund interest was cut by 3 funds last quarter.

As you can see these stocks had an average of 32 hedge funds with bullish positions and the average amount invested in these stocks was $1138 million. That figure was $519 million in EMN’s case. The Ultimate Software Group, Inc. (NASDAQ:ULTI) is the most popular stock in this table. On the other hand The Mosaic Company (NYSE:MOS) is the least popular one with only 29 bullish hedge fund positions. Eastman Chemical Company (NYSE:EMN) is not the least popular stock in this group but hedge fund interest is still below average. This is a slightly negative signal and we’d rather spend our time researching stocks that hedge funds are piling on. Our calculations showed that top 20 most popular stocks among hedge funds returned 1.9% in Q2 through May 30th and outperformed the S&P 500 ETF (SPY) by more than 3 percentage points. Unfortunately EMN wasn’t nearly as popular as these 20 stocks (hedge fund sentiment was quite bearish); EMN investors were disappointed as the stock returned -11.1% during the same time period and underperformed the market. If you are interested in investing in large cap stocks with huge upside potential, you should check out the top 20 most popular stocks among hedge funds as 13 of these stocks already outperformed the market so far in Q2.