Is DowDuPont Inc. (DWDP) A Good Stock To Buy?

“Market conditions are changing. The continued rise in interest rates suggests we are in the early stages of a bond bear market, which could intensify as central banks withdraw liquidity. The receding tide of liquidity will start to reveal more rocks beyond what has been exposed in emerging markets so far, and the value of a value discipline will be in avoiding the biggest capital-destroying rocks. If a rock emerges on the crowded shore of U.S. momentum, it could result in a major liquidity challenge, as momentum is often most intense on the downside as a crowded trade reverses. So investors are facing a large potential trade-off right now: continue to bet on the current dominance of momentum and the S&P 500, or bet on change and take an active value bet in names with attractive value and optionality, but with negative momentum,” said Clearbridge Investments in its market commentary. We aren’t sure whether long-term interest rates will top 5% and value stocks outperform growth, but we follow hedge fund investor letters to understand where the markets and stocks might be going. This article will lay out and discuss the hedge fund and institutional investor sentiment towards DowDuPont Inc. (NYSE:DWDP).

According to most stock holders, hedge funds are perceived as unimportant, old financial tools of the past. While there are greater than 8000 funds trading at present, We choose to focus on the moguls of this club, about 700 funds. These money managers oversee most of the hedge fund industry’s total capital, and by following their finest picks, Insider Monkey has brought to light a few investment strategies that have historically outperformed Mr. Market. Insider Monkey’s flagship best performing hedge funds strategy returned 17.4% year to date and outperformed the market by more than 14 percentage points this year. This strategy also outperformed the market by 3 percentage points in the fourth quarter despite the market volatility (see the details here).

We’re going to take a glance at the key hedge fund action regarding DowDuPont Inc. (NYSE:DWDP).

At the end of the third quarter, a total of 75 of the hedge funds tracked by Insider Monkey held long positions in this stock, a change of -6% from the second quarter of 2018. The graph below displays the number of hedge funds with bullish position in DWDP over the last 6 quarters. With hedge funds’ capital changing hands, there exists a select group of key hedge fund managers who were upping their stakes substantially (or already accumulated large positions). 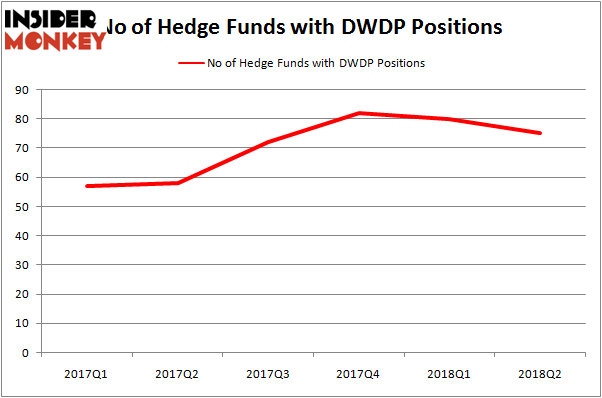 The largest stake in DowDuPont Inc. (NYSE:DWDP) was held by Third Point, which reported holding $942.7 million worth of stock at the end of June. It was followed by Glenview Capital with a $761.3 million position. Other investors bullish on the company included Permian Investment Partners, Lomas Capital Management, and Palestra Capital Management.

Due to the fact that DowDuPont Inc. (NYSE:DWDP) has faced a decline in interest from the smart money, we can see that there exists a select few hedgies that decided to sell off their entire stakes by the end of the second quarter. It’s worth mentioning that Curtis Macnguyen’s Ivory Capital (Investment Mgmt) sold off the biggest stake of the “upper crust” of funds monitored by Insider Monkey, valued at about $70.3 million in stock, and Robert B. Gillam’s McKinley Capital Management was right behind this move, as the fund dropped about $33.7 million worth. These transactions are interesting, as total hedge fund interest fell by 5 funds by the end of the second quarter.

As you can see these stocks had an average of 47 hedge funds with bullish positions and the average amount invested in these stocks was $3358 million. That figure was $5802 million in DWDP’s case. Comcast Corporation (NASDAQ:CMCSA) is the most popular stock in this table. On the other hand Unilever plc (ADR) (NYSE:UL) is the least popular one with only 13 bullish hedge fund positions. DowDuPont Inc. (NYSE:DWDP) is not the most popular stock in this group but hedge fund interest is still above average. This is a slightly positive signal but we’d rather spend our time researching stocks that hedge funds are piling on. In this regard CMCSA or another more popular hedge fund stock might be a better candidate to consider a long position.