A whopping number of 13F filings submitted to the U.S. Securities and Exchange Commission has been processed by Insider Monkey so that individual investors can look at the overall hedge fund sentiment towards the stocks included in their watchlists. These freshly-submitted public filings disclose money managers’ equity positions as of the end of the three-month period that ended June 30, so let’s proceed with the discussion of the hedge fund sentiment on Exxon Mobil Corporation (NYSE:XOM).

Several hedge funds were selling Exxon Mobil during Q2, as there was a 12% decline in the number of funds that owned the stock. One of Hedge Funds’ 5 Favorite Dividend Stocks With 4%+ Yields, Exxon Mobil Corporation (NYSE:XOM) also ranks as one of only two dividend aristocrats in the energy sector, alongside Chevron Corporation (NYSE:CVX). Exxon Mobil has paid out dividends for 36 consecutive years, which landed it a place on our list of the 25 Best Dividend Stocks for Retirement. Billionaire Ken Fisher’s Fisher Investments owned $564 million worth of Exxon Mobil shares on September 30. 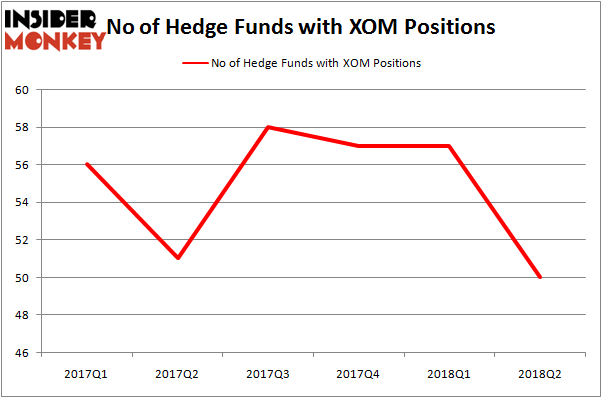 Since Exxon Mobil Corporation (NYSE:XOM) has faced bearish sentiment from the smart money, we can see that there is a sect of money managers that elected to cut their positions entirely in the second quarter. Interestingly, John Overdeck and David Siegel’s Two Sigma Advisors dumped the biggest investment of the “upper crust” of funds watched by Insider Monkey, totaling about $114.3 million in call options. Mike Masters’ Masters Capital Management was right behind this move, as the fund cut about $74.6 million worth. These bearish behaviors are intriguing to say the least, as aggregate hedge fund interest fell by 7 funds in the second quarter.

As you can see these stocks had an average of 81 hedge funds with bullish positions and the average amount invested in these stocks was $11.91 billion. That figure was $2.22 billion in XOM’s case. Visa Inc (NYSE:V) is the most popular stock in this table. On the other hand Royal Dutch Shell plc (ADR) (NYSE:RDS) is the least popular one with only 39 bullish hedge fund positions. Exxon Mobil Corporation (NYSE:XOM) is not the least popular stock in this group but hedge fund interest is still below average and declining. This is a slightly negative signal and we’d rather spend our time researching stocks that hedge funds are piling on, though XOM is the perfect stock to help diversify a dividend portfolio.