Is Diplomat Pharmacy Inc (DPLO) A Good Stock To Buy?

The Insider Monkey team has completed processing the quarterly 13F filings for the December quarter submitted by the hedge funds and other money managers included in our extensive database. Most hedge fund investors endured a torrid quarter, which certainly propelled them to adjust their equity holdings so as to maintain the desired risk profile. As a result, the relevancy of these public filings and their content is indisputable, as they may reveal numerous high-potential stocks. The following article will discuss the smart money sentiment towards Diplomat Pharmacy Inc (NYSE:DPLO).

Diplomat Pharmacy Inc (NYSE:DPLO) shareholders have witnessed a decrease in activity from the world’s largest hedge funds of late. Our calculations also showed that DPLO isn’t among the 30 most popular stocks among hedge funds.

What does the smart money think about Diplomat Pharmacy Inc (NYSE:DPLO)?

Heading into the first quarter of 2019, a total of 10 of the hedge funds tracked by Insider Monkey were bullish on this stock, a change of -23% from the previous quarter. The graph below displays the number of hedge funds with bullish position in DPLO over the last 14 quarters. With hedgies’ capital changing hands, there exists an “upper tier” of key hedge fund managers who were boosting their stakes significantly (or already accumulated large positions). 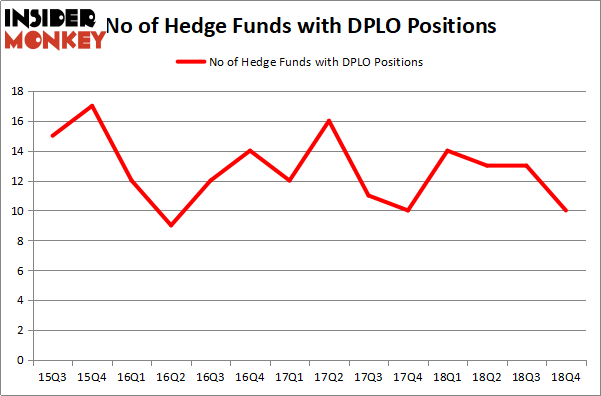 According to publicly available hedge fund and institutional investor holdings data compiled by Insider Monkey, Deerfield Management, managed by James E. Flynn, holds the most valuable position in Diplomat Pharmacy Inc (NYSE:DPLO). Deerfield Management has a $31.6 million position in the stock, comprising 1.3% of its 13F portfolio. On Deerfield Management’s heels is Israel Englander of Millennium Management, with a $9.1 million position; less than 0.1%% of its 13F portfolio is allocated to the stock. Some other members of the smart money that hold long positions contain Dmitry Balyasny’s Balyasny Asset Management, Chuck Royce’s Royce & Associates and Cristan Blackman’s Empirical Capital Partners.

Due to the fact that Diplomat Pharmacy Inc (NYSE:DPLO) has witnessed bearish sentiment from the smart money, we can see that there were a few hedgies that decided to sell off their full holdings in the third quarter. Interestingly, Noam Gottesman’s GLG Partners sold off the biggest stake of the 700 funds monitored by Insider Monkey, valued at close to $9.4 million in stock, and David Harding’s Winton Capital Management was right behind this move, as the fund dropped about $7.9 million worth. These bearish behaviors are interesting, as aggregate hedge fund interest fell by 3 funds in the third quarter.

As you can see these stocks had an average of 11.75 hedge funds with bullish positions and the average amount invested in these stocks was $68 million. That figure was $62 million in DPLO’s case. K12 Inc. (NYSE:LRN) is the most popular stock in this table. On the other hand Neenah, Inc. (NYSE:NP) is the least popular one with only 4 bullish hedge fund positions. Diplomat Pharmacy Inc (NYSE:DPLO) is not the least popular stock in this group but hedge fund interest is still below average. This is a slightly negative signal and we’d rather spend our time researching stocks that hedge funds are piling on. Our calculations showed that top 15 most popular stocks) among hedge funds returned 24.2% through April 22nd and outperformed the S&P 500 ETF (SPY) by more than 7 percentage points. Unfortunately DPLO wasn’t nearly as popular as these 15 stock (hedge fund sentiment was quite bearish); DPLO investors were disappointed as the stock returned -59.6% and underperformed the market. If you are interested in investing in large cap stocks with huge upside potential, you should check out the top 15 most popular stocks) among hedge funds as 13 of these stocks already outperformed the market this year.