Is Diana Shipping Inc. (DSX) A Good Stock To Buy?

Is Diana Shipping Inc. (NYSE:DSX) a good bet right now? We like to analyze hedge fund sentiment before conducting days of in-depth research. We do so because hedge funds and other elite investors have numerous Ivy League graduates, expert network advisers, and supply chain tipsters working or consulting for them. There is not a shortage of news stories covering failed hedge fund investments and it is a fact that hedge funds’ picks don’t beat the market 100% of the time, but their consensus picks have historically done very well and have outperformed the market after adjusting for risk.

Is Diana Shipping Inc. (NYSE:DSX) undervalued? The best stock pickers are getting more optimistic. The number of bullish hedge fund bets improved by 1 recently. Our calculations also showed that DSX isn’t among the 30 most popular stocks among hedge funds (see the video below). DSX was in 9 hedge funds’ portfolios at the end of June. There were 8 hedge funds in our database with DSX holdings at the end of the previous quarter.

In addition to following the biggest hedge funds for investment ideas, we also share stock pitches from conferences, investor letters and other sources  like this one where the fund manager is talking about two under the radar 1000% return potential stocks: first one in internet infrastructure and the second in the heart of advertising market. We use hedge fund buy/sell signals to determine whether to conduct in-depth analysis of these stock ideas which take days. We’re going to take a look at the fresh hedge fund action regarding Diana Shipping Inc. (NYSE:DSX).

How have hedgies been trading Diana Shipping Inc. (NYSE:DSX)?

Heading into the third quarter of 2019, a total of 9 of the hedge funds tracked by Insider Monkey were bullish on this stock, a change of 13% from one quarter earlier. The graph below displays the number of hedge funds with bullish position in DSX over the last 16 quarters. With hedgies’ capital changing hands, there exists an “upper tier” of notable hedge fund managers who were adding to their holdings substantially (or already accumulated large positions). 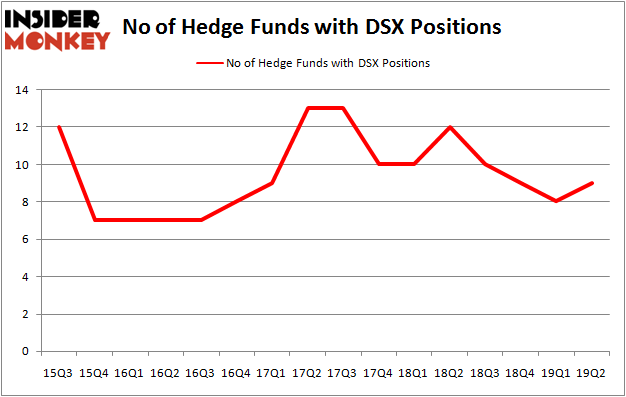 The largest stake in Diana Shipping Inc. (NYSE:DSX) was held by Kopernik Global Investors, which reported holding $16.3 million worth of stock at the end of March. It was followed by Renaissance Technologies with a $4.2 million position. Other investors bullish on the company included 683 Capital Partners, Royce & Associates, and 12 West Capital Management.

As you can see these stocks had an average of 11 hedge funds with bullish positions and the average amount invested in these stocks was $54 million. That figure was $23 million in DSX’s case. Care.com Inc (NYSE:CRCM) is the most popular stock in this table. On the other hand Greenlane Holdings, Inc. (NASDAQ:GNLN) is the least popular one with only 6 bullish hedge fund positions. Diana Shipping Inc. (NYSE:DSX) is not the least popular stock in this group but hedge fund interest is still below average. Our calculations showed that top 20 most popular stocks among hedge funds returned 24.4% in 2019 through September 30th and outperformed the S&P 500 ETF (SPY) by 4 percentage points. A small number of hedge funds were also right about betting on DSX, though not to the same extent, as the stock returned 2.1% during the third quarter and outperformed the market.