Is Denny’s Corporation (DENN) A Good Stock To Buy?

Is Denny’s Corporation (NASDAQ:DENN) a buy, sell, or hold? Hedge funds are taking a bearish view. The number of long hedge fund bets decreased by 3 recently. Our calculations also showed that DENN isn’t among the 30 most popular stocks among hedge funds.

Heading into the first quarter of 2019, a total of 19 of the hedge funds tracked by Insider Monkey were bullish on this stock, a change of -14% from the previous quarter. The graph below displays the number of hedge funds with bullish position in DENN over the last 14 quarters. With the smart money’s capital changing hands, there exists a select group of notable hedge fund managers who were boosting their stakes substantially (or already accumulated large positions). 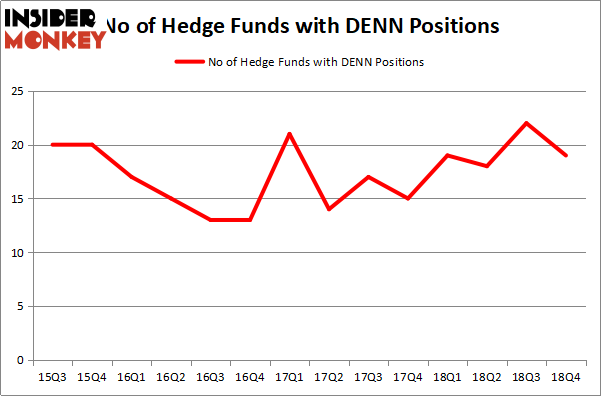 The largest stake in Denny’s Corporation (NASDAQ:DENN) was held by Renaissance Technologies, which reported holding $60.9 million worth of stock at the end of December. It was followed by Cardinal Capital with a $54.2 million position. Other investors bullish on the company included Arrowstreet Capital, Millennium Management, and Beddow Capital Management.

Judging by the fact that Denny’s Corporation (NASDAQ:DENN) has experienced declining sentiment from the aggregate hedge fund industry, we can see that there was a specific group of money managers that slashed their full holdings last quarter. Interestingly, Peter Algert and Kevin Coldiron’s Algert Coldiron Investors dropped the largest investment of the 700 funds monitored by Insider Monkey, valued at close to $0.5 million in stock, and Joel Greenblatt’s Gotham Asset Management was right behind this move, as the fund said goodbye to about $0.4 million worth. These bearish behaviors are intriguing to say the least, as total hedge fund interest fell by 3 funds last quarter.