Is Cullen/Frost Bankers, Inc. (CFR) A Good Stock To Buy?

Is Cullen/Frost Bankers, Inc. (NYSE:CFR) a good equity to bet on right now? We like to check what the smart money thinks first before doing extensive research. Although there have been several high profile failed hedge fund picks, the consensus picks among hedge fund investors have historically outperformed the market after adjusting for known risk attributes. It’s not surprising given that hedge funds have access to better information and more resources to find the winners in the stock market.

Hedge fund interest in Cullen/Frost Bankers, Inc. (NYSE:CFR) shares was flat at the end of last quarter. This is usually a negative indicator. At the end of this article we will also compare CFR to other stocks including Crown Holdings, Inc. (NYSE:CCK), Royal Gold, Inc (NASDAQ:RGLD), and Jefferies Financial Group Inc. (NYSE:JEF) to get a better sense of its popularity. 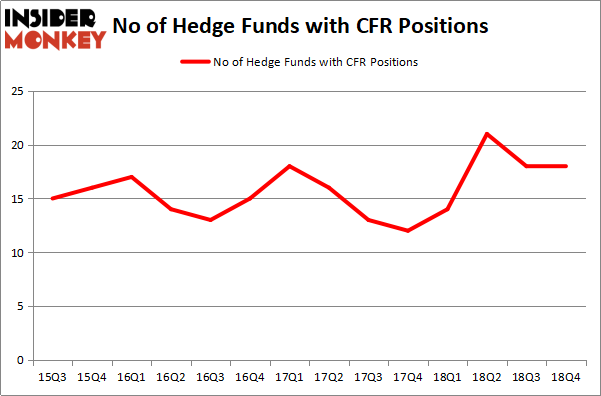 More specifically, Renaissance Technologies was the largest shareholder of Cullen/Frost Bankers, Inc. (NYSE:CFR), with a stake worth $22.8 million reported as of the end of September. Trailing Renaissance Technologies was Two Sigma Advisors, which amassed a stake valued at $12.7 million. Yost Capital Management, Balyasny Asset Management, and Third Avenue Management were also very fond of the stock, giving the stock large weights in their portfolios.

Due to the fact that Cullen/Frost Bankers, Inc. (NYSE:CFR) has experienced declining sentiment from hedge fund managers, logic holds that there lies a certain “tier” of hedgies that slashed their full holdings heading into Q3. Intriguingly, Lee Hicks and Jan Koerner’s Park Presidio Capital cut the biggest stake of all the hedgies followed by Insider Monkey, valued at close to $52.2 million in stock, and Paul Marshall and Ian Wace’s Marshall Wace LLP was right behind this move, as the fund dropped about $32.3 million worth. These transactions are intriguing to say the least, as aggregate hedge fund interest stayed the same (this is a bearish signal in our experience).

As you can see these stocks had an average of 25 hedge funds with bullish positions and the average amount invested in these stocks was $475 million. That figure was $71 million in CFR’s case. Jefferies Financial Group Inc. (NYSE:JEF) is the most popular stock in this table. On the other hand WABCO Holdings Inc. (NYSE:WBC) is the least popular one with only 14 bullish hedge fund positions. Cullen/Frost Bankers, Inc. (NYSE:CFR) is not the least popular stock in this group but hedge fund interest is still below average. Our calculations showed that the top 15 most popular stocks among hedge funds returned 21.3% year-to-date through April 8th and outperformed the S&P 500 ETF (SPY) by more than 5 percentage points. A few hedge funds were also right about betting on CFR, though not to the same extent, as the stock returned 16.9% and outperformed the market as well.