Cubic Corporation (NYSE:CUB) was in 15 hedge funds’ portfolios at the end of March. CUB has experienced a decrease in hedge fund interest in recent months. There were 22 hedge funds in our database with CUB positions at the end of the previous quarter. Our calculations also showed that cub isn’t among the 30 most popular stocks among hedge funds.

At Q1’s end, a total of 15 of the hedge funds tracked by Insider Monkey held long positions in this stock, a change of -32% from the fourth quarter of 2018. By comparison, 11 hedge funds held shares or bullish call options in CUB a year ago. With hedgies’ capital changing hands, there exists a few notable hedge fund managers who were adding to their holdings substantially (or already accumulated large positions). 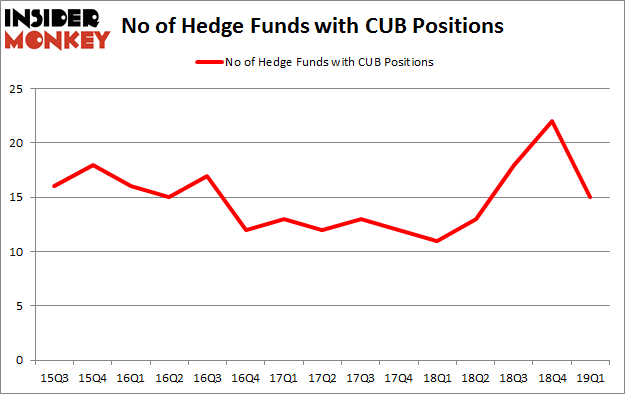 Seeing as Cubic Corporation (NYSE:CUB) has experienced falling interest from the aggregate hedge fund industry, it’s safe to say that there were a few funds that slashed their full holdings last quarter. At the top of the heap, Anand Parekh’s Alyeska Investment Group dumped the biggest position of the “upper crust” of funds monitored by Insider Monkey, worth an estimated $7.4 million in stock. Benjamin A. Smith’s fund, Laurion Capital Management, also cut its stock, about $6.6 million worth. These bearish behaviors are important to note, as aggregate hedge fund interest was cut by 7 funds last quarter.

Let’s now take a look at hedge fund activity in other stocks – not necessarily in the same industry as Cubic Corporation (NYSE:CUB) but similarly valued. These stocks are Sotheby’s (NYSE:BID), Xencor Inc (NASDAQ:XNCR), FGL Holdings (NYSE:FG), and Allakos Inc. (NASDAQ:ALLK). This group of stocks’ market valuations are similar to CUB’s market valuation.

As you can see these stocks had an average of 16.5 hedge funds with bullish positions and the average amount invested in these stocks was $214 million. That figure was $73 million in CUB’s case. FGL Holdings (NYSE:FG) is the most popular stock in this table. On the other hand Allakos Inc. (NASDAQ:ALLK) is the least popular one with only 9 bullish hedge fund positions. Cubic Corporation (NYSE:CUB) is not the least popular stock in this group but hedge fund interest is still below average. Our calculations showed that top 20 most popular stocks among hedge funds returned 6.2% in Q2 through June 19th and outperformed the S&P 500 ETF (SPY) by nearly 3 percentage points. A small number of hedge funds were also right about betting on CUB as the stock returned 7.8% during the same time frame and outperformed the market by an even larger margin.