At Insider Monkey, we pore over the filings of nearly 750 top investment firms every quarter, a process we have now completed for the latest reporting period. The data we’ve gathered as a result gives us access to a wealth of collective knowledge based on these firms’ portfolio holdings as of June 28. In this article, we will use that wealth of knowledge to determine whether or not Cross Country Healthcare, Inc. (NASDAQ:CCRN) makes for a good investment right now.

Hedge fund interest in Cross Country Healthcare, Inc. (NASDAQ:CCRN) shares was flat at the end of last quarter. This is usually a negative indicator. The level and the change in hedge fund popularity aren’t the only variables you need to analyze to decipher hedge funds’ perspectives. A stock may witness a boost in popularity but it may still be less popular than similarly priced stocks. That’s why at the end of this article we will examine companies such as Altisource Portfolio Solutions S.A. (NASDAQ:ASPS), Artesian Resources Corporation (NASDAQ:ARTNA), and Orchid Island Capital, Inc. (NYSE:ORC) to gather more data points. Our calculations also showed that CCRN isn’t among the 30 most popular stocks among hedge funds (see the video below).

In addition to following the biggest hedge funds for investment ideas, we also share stock pitches from conferences, investor letters and other sources  like this one where the fund manager is talking about two under the radar 1000% return potential stocks: first one in internet infrastructure and the second in the heart of advertising market. We use hedge fund buy/sell signals to determine whether to conduct in-depth analysis of these stock ideas which take days. We’re going to check out the new hedge fund action regarding Cross Country Healthcare, Inc. (NASDAQ:CCRN).

How have hedgies been trading Cross Country Healthcare, Inc. (NASDAQ:CCRN)?

At Q2’s end, a total of 8 of the hedge funds tracked by Insider Monkey were long this stock, a change of 0% from one quarter earlier. Below, you can check out the change in hedge fund sentiment towards CCRN over the last 16 quarters. With hedgies’ sentiment swirling, there exists an “upper tier” of noteworthy hedge fund managers who were adding to their stakes considerably (or already accumulated large positions). 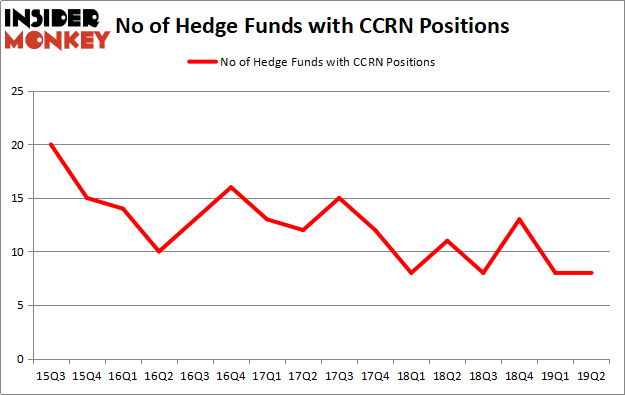 When looking at the institutional investors followed by Insider Monkey, Chuck Royce’s Royce & Associates has the largest position in Cross Country Healthcare, Inc. (NASDAQ:CCRN), worth close to $14.6 million, corresponding to 0.1% of its total 13F portfolio. Sitting at the No. 2 spot is Cliff Asness of AQR Capital Management, with a $3.5 million position; less than 0.1%% of its 13F portfolio is allocated to the company. Remaining hedge funds and institutional investors that are bullish contain Michael Castor’s Sio Capital, D. E. Shaw’s D E Shaw and Renaissance Technologies.

We view hedge fund activity in the stock unfavorable, but in this case there was only a single hedge fund selling its entire position: Laurion Capital Management. One hedge fund selling its entire position doesn’t always imply a bearish intent. Theoretically a hedge fund may decide to sell a promising position in order to invest the proceeds in a more promising idea. However, we don’t think this is the case in this case because only one of the 800+ hedge funds tracked by Insider Monkey identified as a viable investment and initiated a position in the stock (that fund was Sio Capital).

As you can see these stocks had an average of 8 hedge funds with bullish positions and the average amount invested in these stocks was $31 million. That figure was $23 million in CCRN’s case. the Rubicon Project, Inc. (NYSE:RUBI) is the most popular stock in this table. On the other hand Artesian Resources Corporation (NASDAQ:ARTNA) is the least popular one with only 3 bullish hedge fund positions. Cross Country Healthcare, Inc. (NASDAQ:CCRN) is not the least popular stock in this group but hedge fund interest is still below average. Our calculations showed that top 20 most popular stocks among hedge funds returned 24.4% in 2019 through September 30th and outperformed the S&P 500 ETF (SPY) by 4 percentage points. A small number of hedge funds were also right about betting on CCRN as the stock returned 9.8% during the same time frame and outperformed the market by an even larger margin.