Like everyone else, elite investors make mistakes. Some of their top consensus picks, such as Amazon, Facebook and Alibaba, have not done well in Q4 due to various reasons. Nevertheless, the data show elite investors’ consensus picks have done well on average over the long-term. The top 15 S&P 500 stocks among hedge funds at the end of September 2018 returned an average of 1% through March 15th whereas the S&P 500 Index ETF lost 2.2% during the same period. Because their consensus picks have done well, we pay attention to what elite funds think before doing extensive research on a stock. In this article, we take a closer look at Crocs, Inc. (NASDAQ:CROX) from the perspective of those elite funds.

Crocs, Inc. (NASDAQ:CROX) has experienced a decrease in activity from the world’s largest hedge funds lately. Our calculations also showed that CROX isn’t among the 30 most popular stocks among hedge funds.

What have hedge funds been doing with Crocs, Inc. (NASDAQ:CROX)? 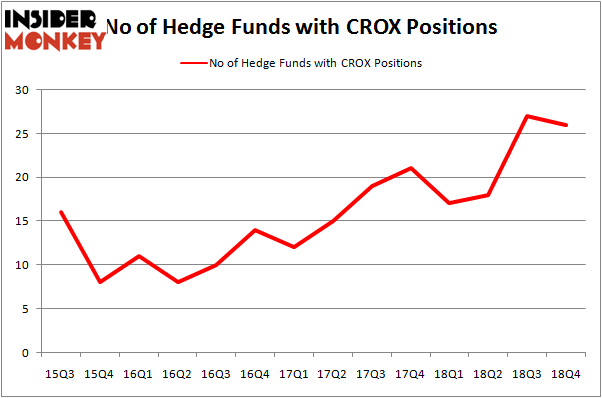 According to Insider Monkey’s hedge fund database, Renaissance Technologies, managed by Jim Simons, holds the number one position in Crocs, Inc. (NASDAQ:CROX). Renaissance Technologies has a $96.8 million position in the stock, comprising 0.1% of its 13F portfolio. Sitting at the No. 2 spot is D E Shaw, led by D. E. Shaw, holding a $39.9 million position; 0.1% of its 13F portfolio is allocated to the stock. Other hedge funds and institutional investors that hold long positions contain John Overdeck and David Siegel’s Two Sigma Advisors, Richard Driehaus’s Driehaus Capital and Paul Marshall and Ian Wace’s Marshall Wace LLP.

Due to the fact that Crocs, Inc. (NASDAQ:CROX) has witnessed falling interest from hedge fund managers, we can see that there was a specific group of money managers who sold off their entire stakes heading into Q3. It’s worth mentioning that James Woodson Davis’s Woodson Capital Management said goodbye to the largest position of the 700 funds watched by Insider Monkey, comprising about $7.6 million in stock. Jeffrey Talpins’s fund, Element Capital Management, also said goodbye to its stock, about $4.9 million worth. These transactions are important to note, as total hedge fund interest fell by 1 funds heading into Q3.