Insider Monkey finished processing more than 700 13F filings made by hedge funds and prominent investors. These filings show these funds’ portfolio positions as of September 30th. What do these smart investors think about Credit Acceptance Corporation (NASDAQ:CACC)?

Is Credit Acceptance Corporation (NASDAQ:CACC) a bargain? Investors who are in the know are in a bullish mood. The number of long hedge fund bets inched up by 4 in recent months, and there were 20 smart money investors long the stock at the end of the third quarter. Even though hedge funds are becoming more optimistic about this stock, the number of those with long positions in it in the third quarter is quite small for it to be considered widely popular among investors. (If you are interested which stock are currently favorite for smart money, take a look at the list of 30 most popular stocks among hedge funds in Q3 of 2018.) What does this mean? If the stock is not among the most attractive ones, does that mean you shouldn’t consider it for your portfolio? Absolutely not. In order to conclude whether Credit Acceptance Corporation can be a smart buy, we need to continue with our analysis of it.

In the 21st century investor’s toolkit there are tons of indicators investors put to use to value their stock investments. A duo of the less known indicators are hedge fund and insider trading interest. We have shown that, historically, those who follow the best picks of the elite money managers can trounce the market by a significant margin (see the details here).

While investigating the stock further more, we found Tao Value’s Q3 Letter in which it discusses its stake in it, with  Credit Acceptance Corporation (NASDAQ:CACC) being one of its two top positions (the other one being Alphabet (NASDAQ:GOOG). We bring you that part of the letter:

“Credit Acceptance (CACC) had a very favorable Q2 2018, benefiting from both loan volume growth per dealer & better than expected collection cross loan vintages. The stock price rallied 16% on the earning release. For position control purpose, I have trimmed the position slightly. In light of raising interest rate, I think that is an adversity for CACC in remaining such high profitability for new loans, however the flip side is that higher rates usually hurt its competitors worse thus could help CACC to expand more effectively. Overall offsetting effects don’t drastically change the competitiveness of this business.”

Even though the company performed very well in the second quarter as written in the letter, we are not just going to jump on it, claiming that the stock is worth purchasing. We are going to examine it further by taking a peek at the new hedge fund action regarding it.

What have hedge funds been doing with Credit Acceptance Corporation (NASDAQ:CACC)?

At the end of the third quarter, a total of 20 of the hedge funds tracked by Insider Monkey were long this stock, a change of 25% from the previous quarter. Below, you can check out the change in hedge fund sentiment towards CACC over the last 13 quarters. So, let’s examine which hedge funds were among the top holders of the stock and which hedge funds were making big moves. 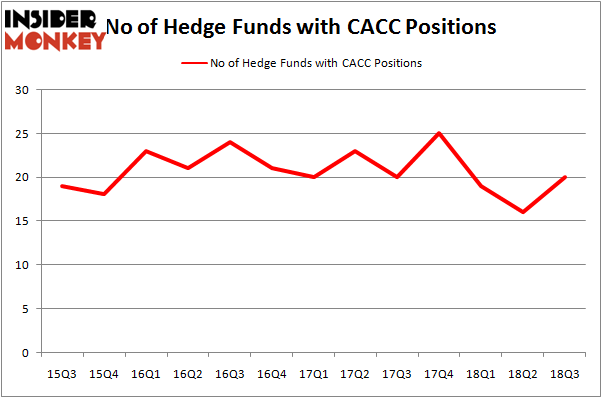 According to Insider Monkey’s hedge fund database, Abrams Bison Investments, managed by Gavin M. Abrams, holds the number one position in Credit Acceptance Corporation (NASDAQ:CACC). Abrams Bison Investments has a $350.5 million position in the stock, comprising 44.3% of its 13F portfolio. Coming in second is BloombergSen, led by Jonathan Bloomberg, holding a $187.6 million position; 10.3% of its 13F portfolio is allocated to the stock. Other members of the smart money that hold long positions encompass William von Mueffling’s Cantillon Capital Management, and Jonathan Auerbach’s Hound Partners.

As you can see these stocks had an average of 33 hedge funds with bullish positions and the average amount invested in these stocks was $1.26 billion. That figure was $1.21 billion in CACC’s case. WPX Energy Inc (NYSE:WPX) is the most popular stock in this table. On the other hand SL Green Realty Corp (NYSE:SLG) is the least popular one with only 18 bullish hedge fund positions. Credit Acceptance Corporation (NASDAQ:CACC) is not the least popular stock in this group but hedge fund interest is still below average. This is a slightly negative signal and we’d rather spend our time researching stocks that hedge funds are piling on. In this regard WPX might be a better candidate to consider a long position.