Is CPFL Energia S.A. (CPL) A Good Stock To Buy?

Concerns over rising interest rates and expected further rate increases have hit several stocks hard during the fourth quarter of 2018. Trends reversed 180 degrees during the first half of 2019 amid Powell’s pivot and optimistic expectations towards a trade deal with China. Hedge funds and institutional investors tracked by Insider Monkey usually invest a disproportionate amount of their portfolios in smaller cap stocks. We have been receiving indications that hedge funds were increasing their overall exposure in the second quarter and this is one of the factors behind the recent movements in major indices. In this article, we will take a closer look at hedge fund sentiment towards CPFL Energia S.A. (NYSE:CPL).

Is CPFL Energia S.A. (NYSE:CPL) an attractive stock to buy now? Hedge funds are becoming hopeful. The number of long hedge fund bets went up by 2 in recent months. Our calculations also showed that CPL isn’t among the 30 most popular stocks among hedge funds (view the video below).

What have hedge funds been doing with CPFL Energia S.A. (NYSE:CPL)?

At the end of the second quarter, a total of 4 of the hedge funds tracked by Insider Monkey held long positions in this stock, a change of 100% from the first quarter of 2019. By comparison, 2 hedge funds held shares or bullish call options in CPL a year ago. With the smart money’s sentiment swirling, there exists a few key hedge fund managers who were adding to their holdings meaningfully (or already accumulated large positions). 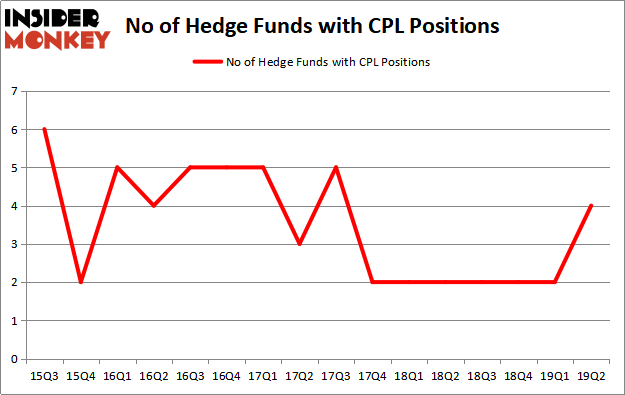 Of the funds tracked by Insider Monkey, Renaissance Technologies has the biggest position in CPFL Energia S.A. (NYSE:CPL), worth close to $16.5 million, corresponding to less than 0.1%% of its total 13F portfolio. On Renaissance Technologies’s heels is Paul Marshall and Ian Wace of Marshall Wace LLP, with a $0.4 million position; the fund has less than 0.1%% of its 13F portfolio invested in the stock. Other peers that are bullish consist of Israel Englander’s Millennium Management, and D. E. Shaw’s D E Shaw.

As one would reasonably expect, key money managers have jumped into CPFL Energia S.A. (NYSE:CPL) headfirst. Marshall Wace LLP, managed by Paul Marshall and Ian Wace, initiated the most valuable position in CPFL Energia S.A. (NYSE:CPL). Marshall Wace LLP had $0.4 million invested in the company at the end of the quarter. Israel Englander’s Millennium Management also made a $0.4 million investment in the stock during the quarter.

As you can see these stocks had an average of 22 hedge funds with bullish positions and the average amount invested in these stocks was $399 million. That figure was $18 million in CPL’s case. Vail Resorts, Inc. (NYSE:MTN) is the most popular stock in this table. On the other hand EQT Midstream Partners LP (NYSE:EQM) is the least popular one with only 8 bullish hedge fund positions. Compared to these stocks CPFL Energia S.A. (NYSE:CPL) is even less popular than EQM. Hedge funds dodged a bullet by taking a bearish stance towards CPL. Our calculations showed that the top 20 most popular hedge fund stocks returned 24.4% in 2019 through September 30th and outperformed the S&P 500 ETF (SPY) by 4 percentage points. Unfortunately CPL wasn’t nearly as popular as these 20 stocks (hedge fund sentiment was very bearish); CPL investors were disappointed as the stock returned 1% during the third quarter and underperformed the market. If you are interested in investing in large cap stocks with huge upside potential, you should check out the top 20 most popular stocks among hedge funds as many of these stocks already outperformed the market so far in 2019.