Is Cott Corporation (COT) Going to Burn These Hedge Funds?

Cott Corporation (NYSE:COT) investors should pay attention to a decrease in hedge fund interest lately. Our calculations also showed that COT isn’t among the 30 most popular stocks among hedge funds (see the video below). 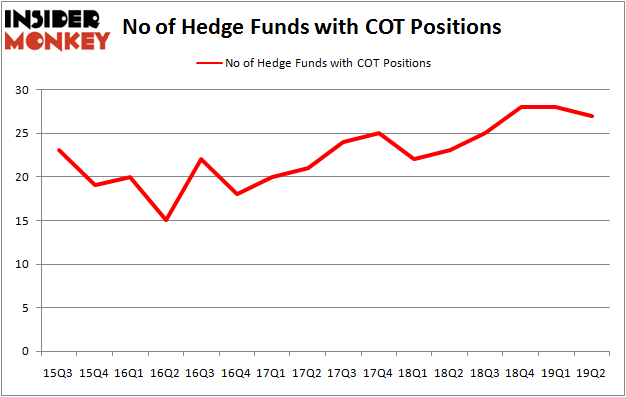 Because Cott Corporation (NYSE:COT) has experienced declining sentiment from the entirety of the hedge funds we track, logic holds that there lies a certain “tier” of hedgies that slashed their full holdings by the end of the second quarter. At the top of the heap, Charles Davidson and Joseph Jacobs’s Wexford Capital cut the largest investment of all the hedgies watched by Insider Monkey, worth about $5.8 million in stock. Ward Davis and Brian Agnew’s fund, Caerus Global Investors, also sold off its stock, about $3 million worth. These moves are interesting, as total hedge fund interest dropped by 1 funds by the end of the second quarter.

As you can see these stocks had an average of 13.75 hedge funds with bullish positions and the average amount invested in these stocks was $114 million. That figure was $415 million in COT’s case. Progress Software Corporation (NASDAQ:PRGS) is the most popular stock in this table. On the other hand ServisFirst Bancshares, Inc. (NASDAQ:SFBS) is the least popular one with only 9 bullish hedge fund positions. Compared to these stocks Cott Corporation (NYSE:COT) is more popular among hedge funds. Our calculations showed that top 20 most popular stocks among hedge funds returned 24.4% in 2019 through September 30th and outperformed the S&P 500 ETF (SPY) by 4 percentage points. Unfortunately COT wasn’t nearly as popular as these 20 stocks and hedge funds that were betting on COT were disappointed as the stock returned -6.1% during the third quarter and underperformed the market. If you are interested in investing in large cap stocks with huge upside potential, you should check out the top 20 most popular stocks among hedge funds as many of these stocks already outperformed the market in Q3.