Before we spend countless hours researching a company, we like to analyze what insiders, hedge funds and billionaire investors think of the stock first. This is a necessary first step in our investment process because our research has shown that the elite investors’ consensus returns have been exceptional. In the following paragraphs, we find out what the billionaire investors and hedge funds think of Copa Holdings, S.A. (NYSE:CPA).

Copa Holdings, S.A. (NYSE:CPA) was in 16 hedge funds’ portfolios at the end of June. CPA investors should pay attention to an increase in hedge fund interest recently. There were 14 hedge funds in our database with CPA holdings at the end of the previous quarter. Our calculations also showed that CPA isn’t among the 30 most popular stocks among hedge funds (view the video below).

In the eyes of most shareholders, hedge funds are seen as slow, outdated investment vehicles of the past. While there are greater than 8000 funds trading today, We look at the leaders of this group, approximately 750 funds. These investment experts preside over most of the smart money’s total capital, and by keeping track of their matchless stock picks, Insider Monkey has formulated several investment strategies that have historically outrun the S&P 500 index. Insider Monkey’s flagship hedge fund strategy surpassed the S&P 500 index by around 5 percentage points a year since its inception in May 2014. We were able to generate large returns even by identifying short candidates. Our portfolio of short stocks lost 25.7% since February 2017 (through September 30th) even though the market was up more than 33% during the same period. We just shared a list of 10 short targets in our latest quarterly update . 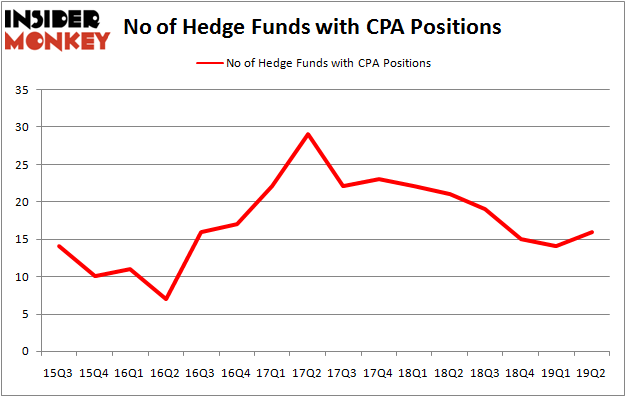 How have hedgies been trading Copa Holdings, S.A. (NYSE:CPA)?

Heading into the third quarter of 2019, a total of 16 of the hedge funds tracked by Insider Monkey were bullish on this stock, a change of 14% from the previous quarter. The graph below displays the number of hedge funds with bullish position in CPA over the last 16 quarters. With hedge funds’ positions undergoing their usual ebb and flow, there exists a few notable hedge fund managers who were upping their stakes substantially (or already accumulated large positions).

More specifically, Renaissance Technologies was the largest shareholder of Copa Holdings, S.A. (NYSE:CPA), with a stake worth $100.5 million reported as of the end of March. Trailing Renaissance Technologies was Polar Capital, which amassed a stake valued at $45.1 million. Point72 Asset Management, Citadel Investment Group, and Diamond Hill Capital were also very fond of the stock, giving the stock large weights in their portfolios.

Now, specific money managers were breaking ground themselves. Driehaus Capital, managed by Richard Driehaus, created the most valuable position in Copa Holdings, S.A. (NYSE:CPA). Driehaus Capital had $14.4 million invested in the company at the end of the quarter. David Halpert’s Prince Street Capital Management also made a $10.1 million investment in the stock during the quarter. The following funds were also among the new CPA investors: Dmitry Balyasny’s Balyasny Asset Management, Matthew Hulsizer’s PEAK6 Capital Management, and Mike Vranos’s Ellington.

As you can see these stocks had an average of 23.25 hedge funds with bullish positions and the average amount invested in these stocks was $366 million. That figure was $278 million in CPA’s case. Brunswick Corporation (NYSE:BC) is the most popular stock in this table. On the other hand Strategic Education, Inc. (NASDAQ:STRA) is the least popular one with only 13 bullish hedge fund positions. Copa Holdings, S.A. (NYSE:CPA) is not the least popular stock in this group but hedge fund interest is still below average. Our calculations showed that top 20 most popular stocks among hedge funds returned 24.4% in 2019 through September 30th and outperformed the S&P 500 ETF (SPY) by 4 percentage points. A small number of hedge funds were also right about betting on CPA, though not to the same extent, as the stock returned 1.9% during the third quarter and outperformed the market.