Is Constellation Brands, Inc. (STZ) A Good Stock According To Hedge Funds?

After several tireless days we have finished crunching the numbers from the more than 700 13F filings issued by the elite hedge funds and other investment firms that we track at Insider Monkey, which disclosed those firms’ equity portfolios as of September 30. The results of that effort will be put on display in this article, as we share valuable insight into the smart money sentiment towards Constellation Brands, Inc. (NYSE:STZ).

Constellation Brands, Inc. (NYSE:STZ) has experienced a decrease in activity from the world’s largest hedge funds lately. STZ was in 61 hedge funds’ portfolios at the end of September. There were 62 hedge funds in our database with STZ positions at the end of the previous quarter. Our calculations also showed that STZ isn’t among the 30 most popular stocks among hedge funds.

What does the smart money think about Constellation Brands, Inc. (NYSE:STZ)? 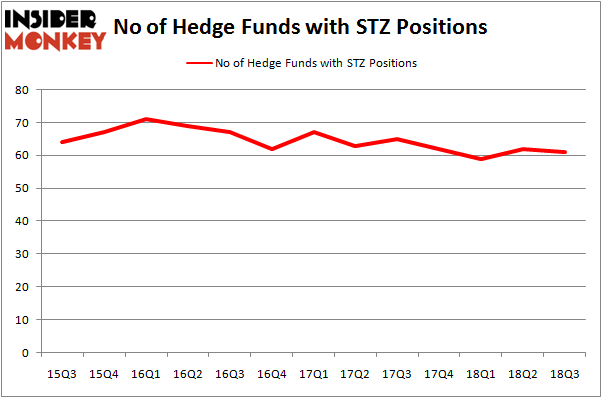 Because Constellation Brands, Inc. (NYSE:STZ) has witnessed falling interest from hedge fund managers, logic holds that there was a specific group of funds that elected to cut their full holdings last quarter. Intriguingly, John Armitage’s Egerton Capital Limited dumped the biggest investment of the “upper crust” of funds followed by Insider Monkey, valued at about $210.3 million in call options, and Matthew Knauer and Mina Faltas’s Nokota Management was right behind this move, as the fund sold off about $146.1 million worth. These moves are intriguing to say the least, as total hedge fund interest fell by 1 funds last quarter.

As you can see these stocks had an average of 42.5 hedge funds with bullish positions and the average amount invested in these stocks was $5.45 billion. That figure was $6.31 billion in STZ’s case. Altaba Inc. (NASDAQ:AABA) is the most popular stock in this table. On the other hand Telefonica S.A. (NYSE:TEF) is the least popular one with only 5 bullish hedge fund positions. Constellation Brands, Inc. (NYSE:STZ) is not the most popular stock in this group but hedge fund interest is still above average. This is a slightly positive signal but we’d rather spend our time researching stocks that hedge funds are piling on. In this regard AABA might be a better candidate to consider a long position.