The Insider Monkey team has completed processing the quarterly 13F filings for the September quarter submitted by the hedge funds and other money managers included in our extensive database. Most hedge fund investors experienced strong gains on the back of a strong market performance, which certainly propelled them to adjust their equity holdings so as to maintain the desired risk profile. As a result, the relevancy of these public filings and their content is indisputable, as they may reveal numerous high-potential stocks. The following article will discuss the smart money sentiment towards CONSOL Energy Inc. (NYSE:CEIX).

Is CONSOL Energy Inc. (NYSE:CEIX) undervalued? The smart money is buying. The number of bullish hedge fund bets went up by 4 recently. Our calculations also showed that CEIX isn’t among the 30 most popular stocks among hedge funds (click for Q3 rankings and see the video below for Q2 rankings).

Unlike the largest US hedge funds that are convinced Dow will soar past 40,000 or the world’s most bearish hedge fund that’s more convinced than ever that a crash is coming, our long-short investment strategy doesn’t rely on bull or bear markets to deliver double digit returns. We only rely on the best performing hedge funds‘ buy/sell signals. Let’s check out the recent hedge fund action encompassing CONSOL Energy Inc. (NYSE:CEIX).

How have hedgies been trading CONSOL Energy Inc. (NYSE:CEIX)?

Heading into the fourth quarter of 2019, a total of 20 of the hedge funds tracked by Insider Monkey were long this stock, a change of 25% from one quarter earlier. Below, you can check out the change in hedge fund sentiment towards CEIX over the last 17 quarters. So, let’s examine which hedge funds were among the top holders of the stock and which hedge funds were making big moves. 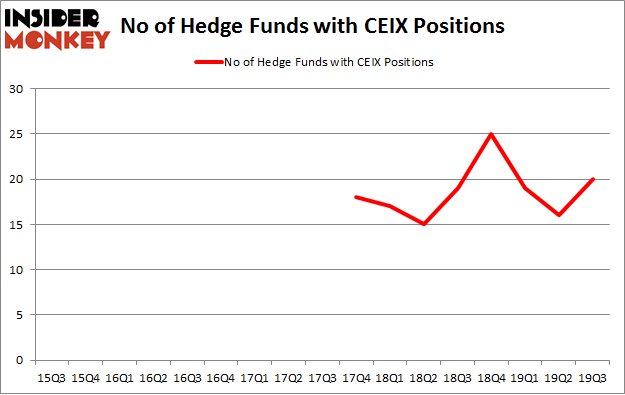 Among these funds, Citadel Investment Group held the most valuable stake in CONSOL Energy Inc. (NYSE:CEIX), which was worth $13.4 million at the end of the third quarter. On the second spot was Mountain Lake Investment Management which amassed $13.3 million worth of shares. Greenlight Capital, Renaissance Technologies, and Winton Capital Management were also very fond of the stock, becoming one of the largest hedge fund holders of the company. In terms of the portfolio weights assigned to each position Mountain Lake Investment Management allocated the biggest weight to CONSOL Energy Inc. (NYSE:CEIX), around 6.72% of its 13F portfolio. Tegean Capital Management is also relatively very bullish on the stock, setting aside 1.86 percent of its 13F equity portfolio to CEIX.

As one would reasonably expect, key money managers were breaking ground themselves. Marshall Wace, managed by Paul Marshall and Ian Wace, created the largest position in CONSOL Energy Inc. (NYSE:CEIX). Marshall Wace had $3.4 million invested in the company at the end of the quarter. Thomas G. Maheras’s Tegean Capital Management also initiated a $1.6 million position during the quarter. The other funds with new positions in the stock are David E. Shaw’s D E Shaw, Clint Carlson’s Carlson Capital, and Israel Englander’s Millennium Management.

As you can see these stocks had an average of 14.75 hedge funds with bullish positions and the average amount invested in these stocks was $78 million. That figure was $60 million in CEIX’s case. Community Health Systems, Inc. (NYSE:CYH) is the most popular stock in this table. On the other hand PDF Solutions, Inc. (NASDAQ:PDFS) is the least popular one with only 11 bullish hedge fund positions. Compared to these stocks CONSOL Energy Inc. (NYSE:CEIX) is more popular among hedge funds. Our calculations showed that top 20 most popular stocks among hedge funds returned 37.4% in 2019 through the end of November and outperformed the S&P 500 ETF (SPY) by 9.9 percentage points. Unfortunately CEIX wasn’t nearly as popular as these 20 stocks and hedge funds that were betting on CEIX were disappointed as the stock returned -18.4% during the first two months of the fourth quarter and underperformed the market. If you are interested in investing in large cap stocks with huge upside potential, you should check out the top 20 most popular stocks among hedge funds as 70 percent of these stocks already outperformed the market in Q4.