Is Companhia Siderurgica Nacional (SID) A Good Stock To Buy?

In these volatile markets we scrutinize hedge fund filings to get a reading on which direction each stock might be going. Our extensive research has shown that imitating the smart money can generate significant returns for retail investors, which is why we track nearly 835 active prominent money managers and analyze their quarterly 13F filings. The stocks that are heavily bought by hedge funds historically outperformed the market, though there is no shortage of high profile failures like hedge funds’ 2018 losses in Facebook and Apple. Let’s take a closer look at what the funds we track think about Companhia Siderurgica Nacional (NYSE:SID) in this article.

Is Companhia Siderurgica Nacional (NYSE:SID) the right pick for your portfolio? The smart money is getting less optimistic. The number of long hedge fund bets fell by 1 recently. Our calculations also showed that SID isn’t among the 30 most popular stocks among hedge funds (click for Q4 rankings and see the video at the end of this article for Q3 rankings). SID was in 6 hedge funds’ portfolios at the end of the fourth quarter of 2019. There were 7 hedge funds in our database with SID positions at the end of the previous quarter.

If you’d ask most stock holders, hedge funds are seen as worthless, old investment tools of yesteryear. While there are over 8000 funds with their doors open at the moment, Our experts look at the leaders of this group, about 850 funds. These investment experts handle the majority of all hedge funds’ total asset base, and by monitoring their matchless equity investments, Insider Monkey has uncovered various investment strategies that have historically exceeded Mr. Market. Insider Monkey’s flagship short hedge fund strategy outpaced the S&P 500 short ETFs by around 20 percentage points a year since its inception in March 2017. Our portfolio of short stocks lost 35.3% since February 2017 (through March 3rd) even though the market was up more than 35% during the same period. We just shared a list of 7 short targets in our latest quarterly update .

We leave no stone unturned when looking for the next great investment idea. For example, we believe electric vehicles and energy storage are set to become giant markets, and we want to take advantage of the declining lithium prices amid the COVID-19 pandemic. So we are checking out investment opportunities like this one. We read hedge fund investor letters and listen to stock pitches at hedge fund conferences. Our best call in 2020 was shorting the market when S&P 500 was trading at 3150 after realizing the coronavirus pandemic’s significance before most investors. Keeping this in mind let’s view the new hedge fund action encompassing Companhia Siderurgica Nacional (NYSE:SID).

What have hedge funds been doing with Companhia Siderurgica Nacional (NYSE:SID)?

At Q4’s end, a total of 6 of the hedge funds tracked by Insider Monkey were bullish on this stock, a change of -14% from the third quarter of 2019. By comparison, 7 hedge funds held shares or bullish call options in SID a year ago. With hedgies’ sentiment swirling, there exists an “upper tier” of key hedge fund managers who were increasing their stakes significantly (or already accumulated large positions). 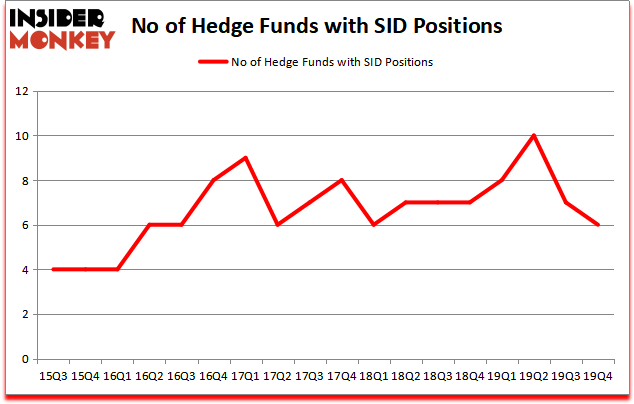 More specifically, Millennium Management was the largest shareholder of Companhia Siderurgica Nacional (NYSE:SID), with a stake worth $10.9 million reported as of the end of September. Trailing Millennium Management was Citadel Investment Group, which amassed a stake valued at $3.9 million. Two Sigma Advisors, Renaissance Technologies, and AQR Capital Management were also very fond of the stock, becoming one of the largest hedge fund holders of the company. In terms of the portfolio weights assigned to each position Millennium Management allocated the biggest weight to Companhia Siderurgica Nacional (NYSE:SID), around 0.01% of its 13F portfolio. Two Sigma Advisors is also relatively very bullish on the stock, setting aside 0.0038 percent of its 13F equity portfolio to SID.

Judging by the fact that Companhia Siderurgica Nacional (NYSE:SID) has faced a decline in interest from the aggregate hedge fund industry, we can see that there exists a select few hedgies that decided to sell off their positions entirely heading into Q4. Interestingly, Donald Sussman’s Paloma Partners said goodbye to the biggest investment of all the hedgies watched by Insider Monkey, valued at an estimated $0 million in call options, and Ken Griffin’s Citadel Investment Group was right behind this move, as the fund sold off about $0 million worth. These transactions are intriguing to say the least, as total hedge fund interest dropped by 1 funds heading into Q4.

As you can see these stocks had an average of 30.5 hedge funds with bullish positions and the average amount invested in these stocks was $461 million. That figure was $18 million in SID’s case. Deckers Outdoor Corp (NYSE:DECK) is the most popular stock in this table. On the other hand MAXIMUS, Inc. (NYSE:MMS) is the least popular one with only 24 bullish hedge fund positions. Compared to these stocks Companhia Siderurgica Nacional (NYSE:SID) is even less popular than MMS. Hedge funds dodged a bullet by taking a bearish stance towards SID. Our calculations showed that the top 20 most popular hedge fund stocks returned 41.3% in 2019 and outperformed the S&P 500 ETF (SPY) by 10.1 percentage points. These stocks lost 13.0% in 2020 through April 6th but managed to beat the market by 4.2 percentage points. Unfortunately SID wasn’t nearly as popular as these 20 stocks (hedge fund sentiment was very bearish); SID investors were disappointed as the stock returned -64.9% during the same time period and underperformed the market. If you are interested in investing in large cap stocks with huge upside potential, you should check out the top 20 most popular stocks among hedge funds as most of these stocks already outperformed the market so far in 2020.