Is Comcast Corporation (NASDAQ:CMCSA) A Good Stock To Buy?

Published on November 4, 2018 at 6:57 pm by Insider Monkey Staff in Hedge Funds,News

Is Comcast Corporation (NASDAQ:CMCSA) a good investment right now? We check hedge fund and billionaire investor sentiment before delving into hours of research. Hedge funds spend millions of dollars on Ivy League graduates, expert networks, and get tips from industry insiders. They sometimes fail miserably but historically their consensus stock picks outperformed the market after adjusting for known risk factors.

Comcast Corporation (NASDAQ:CMCSA) shareholders have witnessed a decrease in hedge fund sentiment of late. It isn’t an exciting stock. According to our database, the last time there was an insider purchase in this stock was in 2011 at an average price of $25.33 and that purchases yielded a total gain of around 55% underperforming the market. Comcast also made our list of 10 companies with the worst customer service in 2017. However, it is still the 12th most popular stock among hedge funds at the end of the second quarter (see the list of 25 most popular stocks among hedge funds).

In the financial world there are a multitude of methods stock traders put to use to size up their stock investments. A duo of the most innovative methods are hedge fund and insider trading interest. Our experts have shown that, historically, those who follow the best picks of the best investment managers can outpace the S&P 500 by a very impressive margin. Insider Monkey’s flagship best performing hedge funds strategy returned 17.4% year to date and outperformed the market by more than 14 percentage points this year. This strategy also outperformed the market by 3 percentage points in the fourth quarter despite the market volatility (see the details here). That’s why we believe hedge fund sentiment is a useful indicator that investors should pay attention to.

At the end of the third quarter, a total of 93 of the hedge funds tracked by Insider Monkey held long positions in this stock, a change of -4% from the second quarter of 2018. By comparison, 94 hedge funds held shares or bullish call options in CMCSA heading into this year. So, let’s see which hedge funds were among the top holders of the stock and which hedge funds were making big moves. 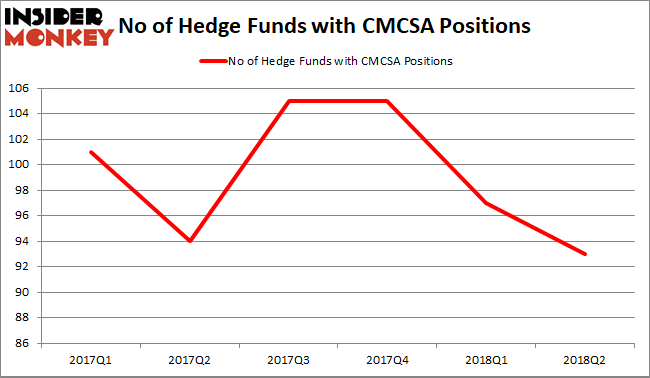 Because Comcast Corporation (NASDAQ:CMCSA) has experienced bearish sentiment from the smart money, we can see that there is a sect of fund managers who sold off their entire stakes by the end of the second quarter. Interestingly, Eric W. Mandelblatt and Gaurav Kapadia’s Soroban Capital Partners dumped the largest stake of the “upper crust” of funds tracked by Insider Monkey, valued at close to $762.3 million in stock. Doug Silverman and Alexander Klabin’s fund, Senator Investment Group, also said goodbye to its stock, about $153.8 million worth. These bearish behaviors are important to note, as aggregate hedge fund interest was cut by 4 funds by the end of the second quarter.

As you can see these stocks had an average of 32 hedge funds with bullish positions and the average amount invested in these stocks was $2308 million. That figure was $7254 million in CMCSA’s case. NVIDIA Corporation (NASDAQ:NVDA) is the most popular stock in this table. On the other hand SAP AG (ADR) (NYSE:SAP) is the least popular one with only 11 bullish hedge fund positions. PetroChina Company Limited (PTR) is also not popular at all among hedge funds. Compared to these stocks Comcast Corporation (NASDAQ:CMCSA) is extremely popular. Considering that hedge funds are fond of this stock in relation to its market cap peers, it may be a good idea to analyze it in detail and potentially include it in your portfolio.