Concerns over rising interest rates and expected further rate increases have hit several stocks hard since the end of the third quarter. NASDAQ and Russell 2000 indices are already in correction territory. More importantly, Russell 2000 ETF (IWM) underperformed the larger S&P 500 ETF (SPY) by about 4 percentage points in the first half of the fourth quarter. Hedge funds and institutional investors tracked by Insider Monkey usually invest a disproportionate amount of their portfolios in smaller cap stocks. We have been receiving indications that hedge funds were paring back their overall exposure and this is one of the factors behind the recent movements in major indices. In this article, we will take a closer look at hedge fund sentiment towards Columbus McKinnon Corporation (NASDAQ:CMCO).

Columbus McKinnon Corporation (NASDAQ:CMCO) has experienced an increase in hedge fund interest of late. CMCO was in 20 hedge funds’ portfolios at the end of the third quarter of 2018. There were 17 hedge funds in our database with CMCO holdings at the end of the previous quarter. Our calculations also showed that CMCO isn’t among the 30 most popular stocks among hedge funds.

In the eyes of most stock holders, hedge funds are perceived as underperforming, outdated financial tools of years past. While there are more than 8,000 funds trading today, We choose to focus on the crème de la crème of this group, about 700 funds. These money managers handle bulk of the hedge fund industry’s total asset base, and by tailing their finest equity investments, Insider Monkey has uncovered many investment strategies that have historically outperformed Mr. Market. Insider Monkey’s flagship hedge fund strategy defeated the S&P 500 index by 6 percentage points per annum since its inception in May 2014 through early November 2018. We were able to generate large returns even by identifying short candidates. Our portfolio of short stocks lost 24% since February 2017 (through December 3rd) even though the market was up nearly 23% during the same period. We just shared a list of 11 short targets in our latest quarterly update.

What does the smart money think about Columbus McKinnon Corporation (NASDAQ:CMCO)?

Heading into the fourth quarter of 2018, a total of 20 of the hedge funds tracked by Insider Monkey held long positions in this stock, a change of 18% from the previous quarter. On the other hand, there were a total of 18 hedge funds with a bullish position in CMCO at the beginning of this year. With the smart money’s positions undergoing their usual ebb and flow, there exists a few notable hedge fund managers who were adding to their stakes considerably (or already accumulated large positions). 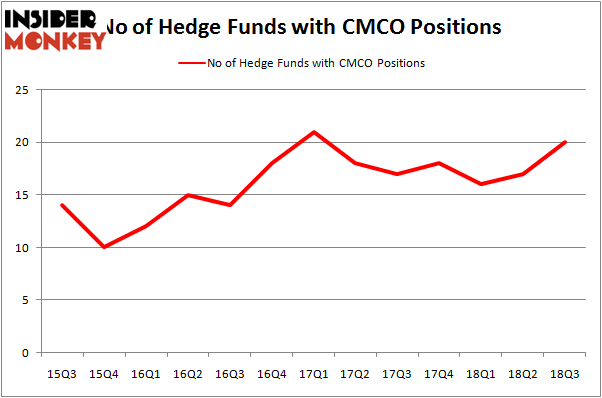 The largest stake in Columbus McKinnon Corporation (NASDAQ:CMCO) was held by Driehaus Capital, which reported holding $19.5 million worth of stock at the end of September. It was followed by Renaissance Technologies with a $12.2 million position. Other investors bullish on the company included Spitfire Capital, Skylands Capital, and AQR Capital Management.

Consequently, specific money managers were breaking ground themselves. Marshall Wace LLP, managed by Paul Marshall and Ian Wace, created the most valuable position in Columbus McKinnon Corporation (NASDAQ:CMCO). Marshall Wace LLP had $3.1 million invested in the company at the end of the quarter. David Costen Haley’s HBK Investments also made a $0.5 million investment in the stock during the quarter. The only other fund with a new position in the stock is Thomas Bailard’s Bailard Inc.

As you can see these stocks had an average of 11.5 hedge funds with bullish positions and the average amount invested in these stocks was $108 million. That figure was $90 million in CMCO’s case. Meridian Bancorp, Inc. (NASDAQ:EBSB) is the most popular stock in this table. On the other hand INTL Fcstone Inc (NASDAQ:INTL) is the least popular one with only 10 bullish hedge fund positions. Compared to these stocks Columbus McKinnon Corporation (NASDAQ:CMCO) is more popular among hedge funds. Considering that hedge funds are fond of this stock in relation to its market cap peers, it may be a good idea to analyze it in detail and potentially include it in your portfolio.