The 700+ hedge funds and money managers tracked by Insider Monkey have already compiled and submitted their 13F filings for the third quarter, which unveil their equity positions as of September 30. We went through these filings, fixed typos and other more significant errors and identified the changes in hedge fund positions. Our extensive review of these public filings is finally over, so this article is set to reveal the smart money sentiment towards Columbia Banking System Inc (NASDAQ:COLB).

Columbia Banking System Inc (NASDAQ:COLB) was in 6 hedge funds’ portfolios at the end of the third quarter of 2016. COLB shareholders have witnessed a decrease in support from the world’s most successful money managers in recent months. There were 10 hedge funds in our database with COLB positions at the end of the second quarter. At the end of this article we will also compare COLB to other stocks including El Paso Electric Company (NYSE:EE), Cosan Limited (USA) (NYSE:CZZ), and Alexander & Baldwin Inc (NYSE:ALEX) to get a better sense of its popularity.

What have hedge funds been doing with Columbia Banking System Inc (NASDAQ:COLB)?

At Q3’s end, a total of 6 of the hedge funds tracked by Insider Monkey were long this stock, a 40% drop from the previous quarter. Below, you can check out the change in hedge fund sentiment towards COLB over the last 5 quarters, which has fallen steeply in 2016. With hedge funds’ sentiment swirling, there exists an “upper tier” of notable hedge fund managers who were upping their stakes considerably (or already accumulated large positions). 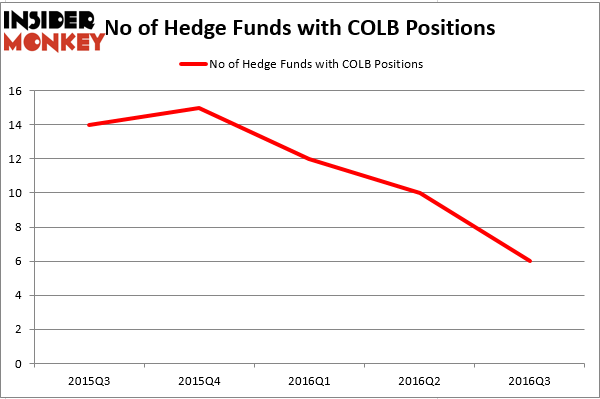 When looking at the institutional investors followed by Insider Monkey, Amy Minella’s Cardinal Capital has the number one position in Columbia Banking System Inc (NASDAQ:COLB), worth close to $69.6 million, accounting for 3.2% of its total 13F portfolio. Sitting at the No. 2 spot is Forest Hill Capital, led by Mark Lee, which holds a $6.7 million position; 3.3% of its 13F portfolio is allocated to the company. Some other hedge funds and institutional investors with similar optimism contain Paul Hondros’ AlphaOne Capital Partners, Ken Fisher’s Fisher Asset Management, and Charles Paquelet’s Skylands Capital. We should note that none of these hedge funds are among our list of the 100 best performing hedge funds, which is based on the performance of their 13F long positions in non-micro-cap stocks.