Is Coeur Mining, Inc. (CDE) A Good Stock To Buy?

Before we spend days researching a stock idea we like to take a look at how hedge funds and billionaire investors recently traded that stock. Russell 2000 ETF (IWM) lagged the larger S&P 500 ETF (SPY) by more than 10 percentage points since the end of the third quarter of 2018. This means hedge funds that are allocating a higher percentage of their portfolio to small-cap stocks were probably underperforming the market. However, this also means that as small-cap stocks start to mean revert, these hedge funds will start delivering better returns than the S&P 500 Index funds. In this article, we will take a look at what hedge funds think about Coeur Mining, Inc. (NYSE:CDE).

Is Coeur Mining, Inc. (NYSE:CDE) a buy right now? Money managers are getting less optimistic. The number of long hedge fund positions went down by 1 in recent months. Our calculations also showed that CDE isn’t among the 30 most popular stocks among hedge funds (see the video below). CDE was in 10 hedge funds’ portfolios at the end of the second quarter of 2019. There were 11 hedge funds in our database with CDE holdings at the end of the previous quarter.

What have hedge funds been doing with Coeur Mining, Inc. (NYSE:CDE)?

At the end of the second quarter, a total of 10 of the hedge funds tracked by Insider Monkey held long positions in this stock, a change of -9% from the previous quarter. By comparison, 12 hedge funds held shares or bullish call options in CDE a year ago. With hedgies’ capital changing hands, there exists a select group of notable hedge fund managers who were boosting their stakes substantially (or already accumulated large positions). 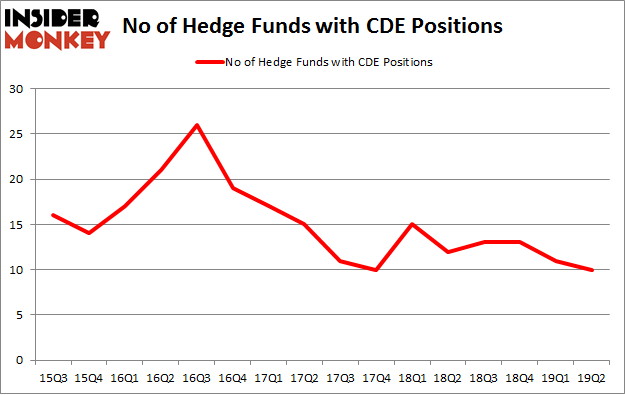 Among these funds, Renaissance Technologies held the most valuable stake in Coeur Mining, Inc. (NYSE:CDE), which was worth $15.1 million at the end of the second quarter. On the second spot was Sprott Asset Management which amassed $4.6 million worth of shares. Moreover, D E Shaw, Millennium Management, and Sloane Robinson Investment Management were also bullish on Coeur Mining, Inc. (NYSE:CDE), allocating a large percentage of their portfolios to this stock.

Seeing as Coeur Mining, Inc. (NYSE:CDE) has faced declining sentiment from the smart money, it’s safe to say that there lies a certain “tier” of fund managers that decided to sell off their entire stakes by the end of the second quarter. Interestingly, Peter Rathjens, Bruce Clarke and John Campbell’s Arrowstreet Capital dumped the biggest investment of all the hedgies followed by Insider Monkey, valued at close to $1.1 million in stock, and Chuck Royce’s Royce & Associates was right behind this move, as the fund said goodbye to about $1.1 million worth. These transactions are important to note, as aggregate hedge fund interest dropped by 1 funds by the end of the second quarter.

As you can see these stocks had an average of 17.5 hedge funds with bullish positions and the average amount invested in these stocks was $154 million. That figure was $29 million in CDE’s case. Contura Energy, Inc. (NYSE:CTRA) is the most popular stock in this table. On the other hand i3 Verticals, Inc. (NASDAQ:IIIV) is the least popular one with only 13 bullish hedge fund positions. Compared to these stocks Coeur Mining, Inc. (NYSE:CDE) is even less popular than IIIV. Hedge funds clearly dropped the ball on CDE as the stock delivered strong returns, though hedge funds’ consensus picks still generated respectable returns. Our calculations showed that top 20 most popular stocks among hedge funds returned 24.4% in 2019 through September 30th and outperformed the S&P 500 ETF (SPY) by 4 percentage points. A small number of hedge funds were also right about betting on CDE as the stock returned 10.8% during the third quarter and outperformed the market by an even larger margin.

Here is What Hedge Funds Think About Calavo Growers, Inc. (CVGW)
Monthly Newsletter Strategy
Download a free copy of our newsletter and see the details inside!
Hedge Fund Resource Center
Related News
Is Coeur Mining, Inc. (CDE) A Good Stock To Buy? Did Hedge Funds Drop The Ball On Coeur Mining, Inc. (CDE) ? What Is Going On In The Financial Markets Today? Is Coeur Mining Inc (CDE) A Good Stock To Buy? Genworth Financial (GNW), Avon Products (AVP) Just Some of the Stocks That Powered Shah Capital to Splendid Quarter 5 NYSE Stocks That Cruised to 52-Week Highs Yesterday Shah Capital’s Newest Stock Picks and Old Favorites 11 Largest Auto Insurance Companies In The US In 2019 10 Poorest Cities in America in 2019 8 Lowest Tar and Nicotine Cigarette Brands in 2019
Billionaire Hedge Funds