Is CNX Resources Corporation (CNX) A Good Stock To Buy ?

While the market driven by short-term sentiment influenced by uncertainty regarding the future of the interest rate environment in the US, declining oil prices and the trade war with China, many smart money investors kept their optimism regarding the current bull run in the fourth quarter, while still hedging many of their long positions. However, as we know, big investors usually buy stocks with strong fundamentals, which is why we believe we can profit from imitating them. In this article, we are going to take a look at the smart money sentiment surrounding CNX Resources Corporation (NYSE:CNX).

Hedge fund interest in CNX Resources Corporation (NYSE:CNX) shares was flat at the end of last quarter. This is usually a negative indicator. The level and the change in hedge fund popularity aren’t the only variables you need to analyze to decipher hedge funds’ perspectives. A stock may witness a boost in popularity but it may still be less popular than similarly priced stocks. That’s why at the end of this article we will examine companies such as First Financial Bancorp (NASDAQ:FFBC), iRobot Corporation (NASDAQ:IRBT), and BBVA Banco Frances S.A. (NYSE:BFR) to gather more data points.

Heading into the first quarter of 2019, a total of 23 of the hedge funds tracked by Insider Monkey were bullish on this stock, a change of 0% from one quarter earlier. Below, you can check out the change in hedge fund sentiment towards CNX over the last 14 quarters. With hedgies’ capital changing hands, there exists an “upper tier” of key hedge fund managers who were boosting their stakes substantially (or already accumulated large positions). 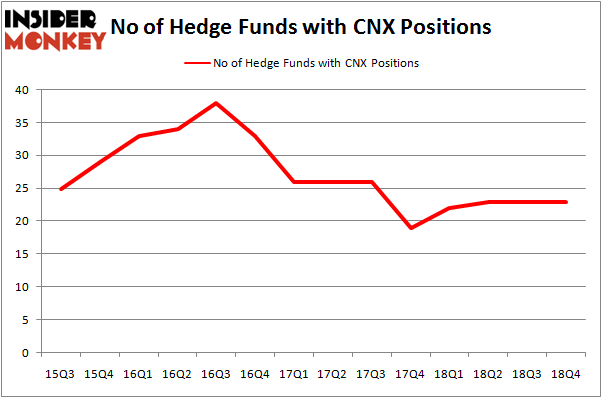 Among these funds, Southeastern Asset Management held the most valuable stake in CNX Resources Corporation (NYSE:CNX), which was worth $559.8 million at the end of the third quarter. On the second spot was Millennium Management which amassed $49.3 million worth of shares. Moreover, Greenlight Capital, AQR Capital Management, and Citadel Investment Group were also bullish on CNX Resources Corporation (NYSE:CNX), allocating a large percentage of their portfolios to this stock.

Seeing as CNX Resources Corporation (NYSE:CNX) has experienced declining sentiment from the smart money, we can see that there were a few hedge funds who were dropping their entire stakes heading into Q3. Intriguingly, Peter Rathjens, Bruce Clarke and John Campbell’s Arrowstreet Capital said goodbye to the largest position of the 700 funds tracked by Insider Monkey, totaling an estimated $8.3 million in stock, and Frederick DiSanto’s Ancora Advisors was right behind this move, as the fund dumped about $4 million worth. These moves are interesting, as aggregate hedge fund interest stayed the same (this is a bearish signal in our experience).

As you can see these stocks had an average of 13.75 hedge funds with bullish positions and the average amount invested in these stocks was $51 million. That figure was $748 million in CNX’s case. Repligen Corporation (NASDAQ:RGEN) is the most popular stock in this table. On the other hand First Financial Bancorp (NASDAQ:FFBC) is the least popular one with only 6 bullish hedge fund positions. Compared to these stocks CNX Resources Corporation (NYSE:CNX) is more popular among hedge funds. Our calculations showed that top 15 most popular stocks) among hedge funds returned 24.2% through April 22nd and outperformed the S&P 500 ETF (SPY) by more than 7 percentage points. Unfortunately CNX wasn’t nearly as popular as these 15 stock and hedge funds that were betting on CNX were disappointed as the stock returned -10.1% and underperformed the market. If you are interested in investing in large cap stocks with huge upside potential, you should check out the top 15 most popular stocks) among hedge funds as 13 of these stocks already outperformed the market this year.