Is Cloudera, Inc. (CLDR) A Good Stock To Buy?

Russell 2000 ETF (IWM) lagged the larger S&P 500 ETF (SPY) by more than 10 percentage points since the end of the third quarter of 2018 as investors first worried over the possible ramifications of rising interest rates and the escalation of the trade war with China. The hedge funds and institutional investors we track typically invest more in smaller-cap stocks than an average investor (i.e. only about 60% S&P 500 constituents were among the 500 most popular stocks among hedge funds), and we have seen data that shows those funds paring back their overall exposure. Those funds cutting positions in small-caps is one reason why volatility has increased. In the following paragraphs, we take a closer look at what hedge funds and prominent investors think of Cloudera, Inc. (NYSE:CLDR) and see how the stock is affected by the recent hedge fund activity.

Cloudera, Inc. (NYSE:CLDR) has experienced an increase in hedge fund interest lately. CLDR was in 26 hedge funds’ portfolios at the end of September. There were 25 hedge funds in our database with CLDR holdings at the end of the previous quarter. Our calculations also showed that CLDR isn’t among the 30 most popular stocks among hedge funds (click for Q3 rankings and see the video below for Q2 rankings).

Unlike the largest US hedge funds that are convinced Dow will soar past 40,000 or the world’s most bearish hedge fund that’s more convinced than ever that a crash is coming, our long-short investment strategy doesn’t rely on bull or bear markets to deliver double digit returns. We only rely on the best performing hedge funds‘ buy/sell signals. Let’s take a look at the latest hedge fund action surrounding Cloudera, Inc. (NYSE:CLDR).

How have hedgies been trading Cloudera, Inc. (NYSE:CLDR)? 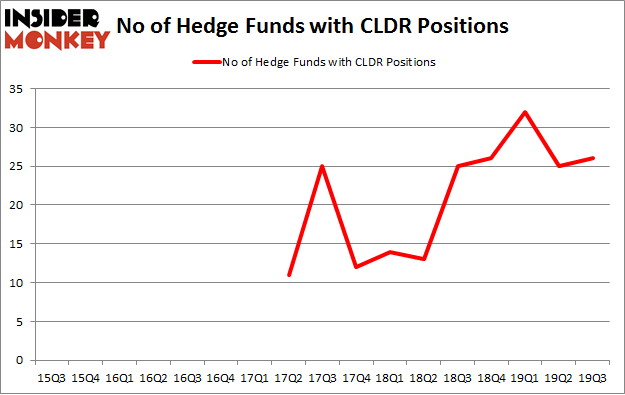 Among these funds, Icahn Capital held the most valuable stake in Cloudera, Inc. (NYSE:CLDR), which was worth $485.5 million at the end of the third quarter. On the second spot was RGM Capital which amassed $61.9 million worth of shares. Raging Capital Management, Citadel Investment Group, and Intrinsic Edge Capital were also very fond of the stock, becoming one of the largest hedge fund holders of the company. In terms of the portfolio weights assigned to each position Raging Capital Management allocated the biggest weight to Cloudera, Inc. (NYSE:CLDR), around 6.69% of its portfolio. RGM Capital is also relatively very bullish on the stock, designating 4.12 percent of its 13F equity portfolio to CLDR.

With a general bullishness amongst the heavyweights, specific money managers were breaking ground themselves. Icahn Capital, managed by Carl Icahn, established the biggest position in Cloudera, Inc. (NYSE:CLDR). Icahn Capital had $485.5 million invested in the company at the end of the quarter. Mark Coe’s Intrinsic Edge Capital also initiated a $10.5 million position during the quarter. The other funds with brand new CLDR positions are Chuck Royce’s Royce & Associates, Brandon Haley’s Holocene Advisors, and David E. Shaw’s D E Shaw.

As you can see these stocks had an average of 16 hedge funds with bullish positions and the average amount invested in these stocks was $156 million. That figure was $653 million in CLDR’s case. Ultragenyx Pharmaceutical Inc (NASDAQ:RARE) is the most popular stock in this table. On the other hand Columbia Property Trust Inc (NYSE:CXP) is the least popular one with only 14 bullish hedge fund positions. Compared to these stocks Cloudera, Inc. (NYSE:CLDR) is more popular among hedge funds. Our calculations showed that top 20 most popular stocks among hedge funds returned 37.4% in 2019 through the end of November and outperformed the S&P 500 ETF (SPY) by 9.9 percentage points. Hedge funds were also right about betting on CLDR as the stock returned 11.5% during the first two months of Q4 and outperformed the market by an even larger margin. Hedge funds were clearly right about piling into this stock relative to other stocks with similar market capitalizations.