Is Clearwater Paper Corp (CLW) A Good Stock To Buy?

Is Clearwater Paper Corp (NYSE:CLW) a good investment right now? We check hedge fund and billionaire investor sentiment before delving into hours of research. Hedge funds spend millions of dollars on Ivy League graduates, expert networks, and get tips from investment bankers and industry insiders. Sure they sometimes fail miserably, but their consensus stock picks historically outperformed the market after adjusting for known risk factors.

Is Clearwater Paper Corp (NYSE:CLW) a great investment today? The best stock pickers are reducing their bets on the stock. The number of long hedge fund positions were cut by 1 recently. Our calculations also showed that CLW isn’t among the 30 most popular stocks among hedge funds (see the video below). 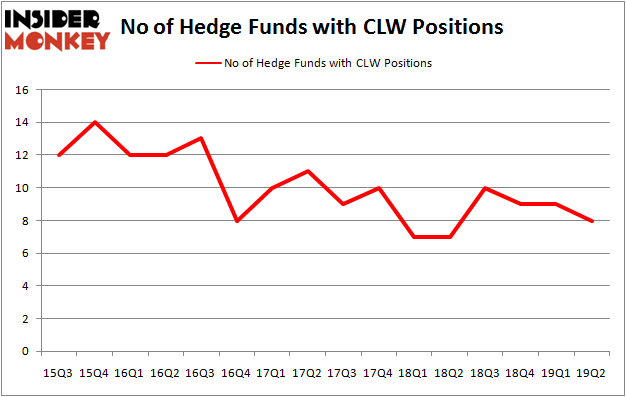 In addition to following the biggest hedge funds for investment ideas, we also share stock pitches from conferences, investor letters and other sources  like this one where the fund manager is talking about two under the radar 1000% return potential stocks: first one in internet infrastructure and the second in the heart of advertising market. We use hedge fund buy/sell signals to determine whether to conduct in-depth analysis of these stock ideas which take days. Let’s take a look at the key hedge fund action encompassing Clearwater Paper Corp (NYSE:CLW).

According to Insider Monkey’s hedge fund database, Sabrepoint Capital, managed by George Baxter, holds the largest position in Clearwater Paper Corp (NYSE:CLW). Sabrepoint Capital has a $12.6 million position in the stock, comprising 5.6% of its 13F portfolio. The second most bullish fund manager is Sabrepoint Capital, led by George Baxter, holding a $12.1 million call position; the fund has 5.4% of its 13F portfolio invested in the stock. Some other professional money managers that are bullish encompass Israel Englander’s Millennium Management, Peter Rathjens, Bruce Clarke and John Campbell’s Arrowstreet Capital and Ken Griffin’s Citadel Investment Group.

Since Clearwater Paper Corp (NYSE:CLW) has experienced a decline in interest from the aggregate hedge fund industry, it’s easy to see that there is a sect of money managers that decided to sell off their positions entirely in the second quarter. It’s worth mentioning that John Overdeck and David Siegel’s Two Sigma Advisors cut the largest position of the “upper crust” of funds watched by Insider Monkey, comprising an estimated $0.7 million in stock, and Andrew Feldstein and Stephen Siderow’s Blue Mountain Capital was right behind this move, as the fund sold off about $0.7 million worth. These transactions are interesting, as total hedge fund interest dropped by 1 funds in the second quarter.

As you can see these stocks had an average of 6 hedge funds with bullish positions and the average amount invested in these stocks was $35 million. That figure was $19 million in CLW’s case. Cumulus Media Inc (NASDAQ:CMLS) is the most popular stock in this table. On the other hand Source Capital, Inc. (NYSE:SOR) is the least popular one with only 2 bullish hedge fund positions. Clearwater Paper Corp (NYSE:CLW) is not the most popular stock in this group but hedge fund interest is still above average. Our calculations showed that top 20 most popular stocks among hedge funds returned 24.4% in 2019 through September 30th and outperformed the S&P 500 ETF (SPY) by 4 percentage points. Hedge funds were also right about betting on CLW as the stock returned 14.2% during the third quarter and outperformed the market. Hedge funds were rewarded for their relative bullishness.