The market has been volatile as the Federal Reserve continues its rate hikes to normalize the interest rates. Small cap stocks have been hit hard as a result, as the Russell 2000 ETF (IWM) has underperformed the larger S&P 500 ETF (SPY) by about 4 percentage points through November 16th. SEC filings and hedge fund investor letters indicate that the smart money seems to be paring back their overall long exposure since summer months, and the funds’ movements is one of the reasons why the major indexes have retraced. In this article, we analyze what the smart money thinks of Citizens Financial Group Inc (NYSE:CFG) and find out how it is affected by hedge funds’ moves.

Citizens Financial Group Inc (NYSE:CFG) was in 42 hedge funds’ portfolios at the end of the third quarter of 2018. CFG has seen a decrease in hedge fund sentiment in recent months. There were 47 hedge funds in our database with CFG holdings at the end of the previous quarter. Our calculations also showed that CFG isn’t among the 30 most popular stocks among hedge funds.

At Q3’s end, a total of 42 of the hedge funds tracked by Insider Monkey were bullish on this stock, a change of -11% from the previous quarter. On the other hand, there were a total of 41 hedge funds with a bullish position in CFG at the beginning of this year. With hedgies’ positions undergoing their usual ebb and flow, there exists a select group of noteworthy hedge fund managers who were adding to their holdings considerably (or already accumulated large positions). 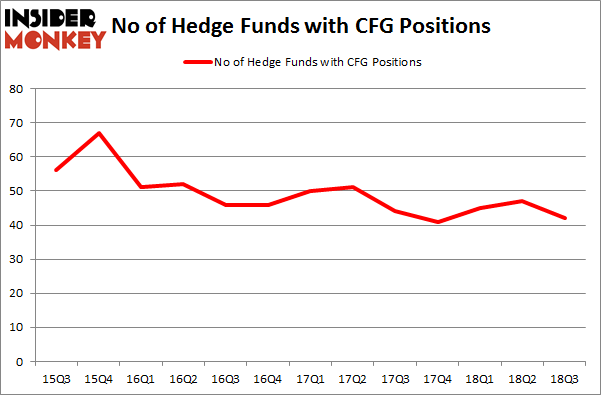 The largest stake in Citizens Financial Group Inc (NYSE:CFG) was held by Citadel Investment Group, which reported holding $431.9 million worth of stock at the end of September. It was followed by Carlson Capital with a $145.8 million position. Other investors bullish on the company included D E Shaw, GLG Partners, and EJF Capital.

Because Citizens Financial Group Inc (NYSE:CFG) has witnessed declining sentiment from the smart money, it’s easy to see that there was a specific group of hedgies that elected to cut their full holdings last quarter. It’s worth mentioning that Jim Simons’s Renaissance Technologies sold off the biggest investment of the 700 funds watched by Insider Monkey, totaling about $65.8 million in stock. David Tepper’s fund, Appaloosa Management LP, also dumped its stock, about $48.9 million worth. These bearish behaviors are intriguing to say the least, as total hedge fund interest dropped by 5 funds last quarter.

As you can see these stocks had an average of 26.75 hedge funds with bullish positions and the average amount invested in these stocks was $1.46 billion. That figure was $1.56 billion in CFG’s case. FirstEnergy Corp. (NYSE:FE) is the most popular stock in this table. On the other hand Plains All American Pipeline, L.P. (NYSE:PAA) is the least popular one with only 10 bullish hedge fund positions. Compared to these stocks Citizens Financial Group Inc (NYSE:CFG) is more popular among hedge funds. Considering that hedge funds are fond of this stock in relation to its market cap peers, it may be a good idea to analyze it in detail and potentially include it in your portfolio.

Billionaire Leon Cooperman’s New Stock Picks
Monthly Newsletter Strategy
Download a free copy of our newsletter and see the details inside!
Hedge Fund Resource Center
Related News
25 Stocks Billionaires Are Piling On This Finance Stock is a Favorite Among Top Hedge Funds The 25 Biggest Insider Purchases in October Is Citizens Financial Group Inc (CFG) a Good Stock to Buy? Should You Follow This Financial-Focused Fund Into Its Bets on Zions Bancorporation (ZION), Meridian Bancorp, Inc. (EBSB) & Two Other Stocks? Why You Should Get Hyped About Ameris Bancorp (ABCB), Citizens Financial Group Inc (CFG), And These Other Finance Stocks Last Quarter’s Best Performing Hedge Fund Is Betting On These Stocks The 10 Best Islands to Visit in 2019 5 Most Socially Responsible Companies in America 5 Ways You Can Eliminate Credit Card Debt
Billionaire Hedge Funds