The 700+ hedge funds and famous money managers tracked by Insider Monkey have already compiled and submitted their 13F filings for the second quarter, which unveil their equity positions as of June 28. We went through these filings, fixed typos and other more significant errors and identified the changes in hedge fund portfolios. Our extensive review of these public filings is finally over, so this article is set to reveal the smart money sentiment towards Chesapeake Utilities Corporation (NYSE:CPK).

Chesapeake Utilities Corporation (NYSE:CPK) has seen a decrease in support from the world’s most elite money managers recently. CPK was in 9 hedge funds’ portfolios at the end of the second quarter of 2019. There were 11 hedge funds in our database with CPK positions at the end of the previous quarter. Our calculations also showed that CPK isn’t among the 30 most popular stocks among hedge funds (see the video below). 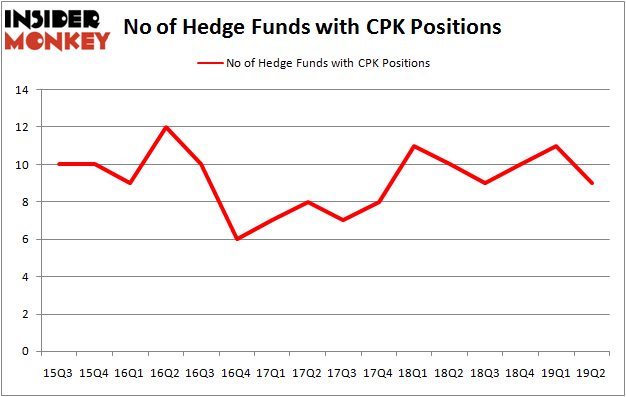 What does smart money think about Chesapeake Utilities Corporation (NYSE:CPK)?

At Q2’s end, a total of 9 of the hedge funds tracked by Insider Monkey held long positions in this stock, a change of -18% from the first quarter of 2019. Below, you can check out the change in hedge fund sentiment towards CPK over the last 16 quarters. So, let’s review which hedge funds were among the top holders of the stock and which hedge funds were making big moves.

When looking at the institutional investors followed by Insider Monkey, Renaissance Technologies, holds the number one position in Chesapeake Utilities Corporation (NYSE:CPK). Renaissance Technologies has a $27.8 million position in the stock, comprising less than 0.1%% of its 13F portfolio. Coming in second is Israel Englander of Millennium Management, with a $6 million position; less than 0.1%% of its 13F portfolio is allocated to the company. Other hedge funds and institutional investors that are bullish contain Cliff Asness’s AQR Capital Management, Ken Griffin’s Citadel Investment Group and Mario Gabelli’s GAMCO Investors.

Because Chesapeake Utilities Corporation (NYSE:CPK) has experienced falling interest from hedge fund managers, we can see that there lies a certain “tier” of hedgies who sold off their entire stakes by the end of the second quarter. At the top of the heap, Michael Platt and William Reeves’s BlueCrest Capital Mgmt. cut the biggest position of all the hedgies followed by Insider Monkey, valued at an estimated $0.3 million in stock, and Andrew Feldstein and Stephen Siderow’s Blue Mountain Capital was right behind this move, as the fund dropped about $0.3 million worth. These bearish behaviors are interesting, as aggregate hedge fund interest fell by 2 funds by the end of the second quarter.

As you can see these stocks had an average of 15.75 hedge funds with bullish positions and the average amount invested in these stocks was $149 million. That figure was $38 million in CPK’s case. MSG Networks Inc (NYSE:MSGN) is the most popular stock in this table. On the other hand State Auto Financial Corporation (NASDAQ:STFC) is the least popular one with only 7 bullish hedge fund positions. Chesapeake Utilities Corporation (NYSE:CPK) is not the least popular stock in this group but hedge fund interest is still below average. This is a slightly negative signal and we’d rather spend our time researching stocks that hedge funds are piling on. Our calculations showed that top 20 most popular stocks among hedge funds returned 24.4% in 2019 through September 30th and outperformed the S&P 500 ETF (SPY) by 4 percentage points. Unfortunately CPK wasn’t nearly as popular as these 20 stocks (hedge fund sentiment was quite bearish); CPK investors were disappointed as the stock returned 0.7% during the third quarter and underperformed the market. If you are interested in investing in large cap stocks with huge upside potential, you should check out the top 20 most popular stocks among hedge funds as many of these stocks already outperformed the market so far in 2019.