Is Chesapeake Energy Corporation (CHK) A Good Stock To Buy?

The Insider Monkey team has completed processing the quarterly 13F filings for the March quarter submitted by the hedge funds and other money managers included in our extensive database. Most hedge fund investors experienced strong gains on the back of a strong market performance, which certainly propelled them to adjust their equity holdings so as to maintain the desired risk profile. As a result, the relevancy of these public filings and their content is indisputable, as they may reveal numerous high-potential stocks. The following article will discuss the smart money sentiment towards Chesapeake Energy Corporation (NYSE:CHK).

Is Chesapeake Energy Corporation (NYSE:CHK) a bargain? Money managers are buying. The number of bullish hedge fund bets inched up by 5 recently. Our calculations also showed that CHK isn’t among the 30 most popular stocks among hedge funds. CHK was in 20 hedge funds’ portfolios at the end of the first quarter of 2019. There were 15 hedge funds in our database with CHK holdings at the end of the previous quarter. 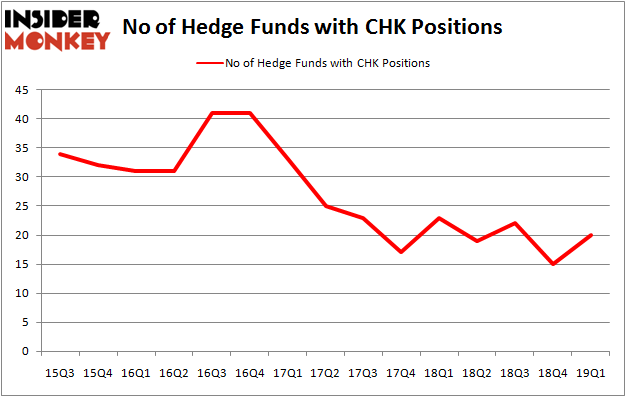 According to Insider Monkey’s hedge fund database, Cliff Asness’s AQR Capital Management has the number one position in Chesapeake Energy Corporation (NYSE:CHK), worth close to $65.1 million, comprising 0.1% of its total 13F portfolio. Sitting at the No. 2 spot is Millennium Management, led by Israel Englander, holding a $52.7 million position; the fund has 0.1% of its 13F portfolio invested in the stock. Other peers with similar optimism contain Joe Huber’s Huber Capital Management, and Peter Rathjens, Bruce Clarke and John Campbell’s Arrowstreet Capital.

Now, specific money managers have jumped into Chesapeake Energy Corporation (NYSE:CHK) headfirst. Arrowstreet Capital, managed by Peter Rathjens, Bruce Clarke and John Campbell, assembled the most outsized position in Chesapeake Energy Corporation (NYSE:CHK). Arrowstreet Capital had $8.9 million invested in the company at the end of the quarter. Joel Greenblatt’s Gotham Asset Management also made a $2 million investment in the stock during the quarter. The other funds with new positions in the stock are Clint Carlson’s Carlson Capital, Mark Wolfson and Jamie Alexander’s Jasper Ridge Partners, and Kenneth Tropin’s Graham Capital Management.

As you can see these stocks had an average of 21 hedge funds with bullish positions and the average amount invested in these stocks was $412 million. That figure was $180 million in CHK’s case. Popular Inc (NASDAQ:BPOP) is the most popular stock in this table. On the other hand Seaboard Corporation (NYSE:SEB) is the least popular one with only 11 bullish hedge fund positions. Chesapeake Energy Corporation (NYSE:CHK) is not the least popular stock in this group but hedge fund interest is still below average. This is a slightly negative signal and we’d rather spend our time researching stocks that hedge funds are piling on. Our calculations showed that top 20 most popular stocks among hedge funds returned 1.9% in Q2 through May 30th and outperformed the S&P 500 ETF (SPY) by more than 3 percentage points. Unfortunately CHK wasn’t nearly as popular as these 20 stocks (hedge fund sentiment was quite bearish); CHK investors were disappointed as the stock returned -34.2% during the same time period and underperformed the market. If you are interested in investing in large cap stocks with huge upside potential, you should check out the top 20 most popular stocks among hedge funds as 13 of these stocks already outperformed the market so far in Q2.