Is Cheniere Energy, Inc. (LNG) A Good Stock To Buy?

At Insider Monkey, we pore over the filings of nearly 750 top investment firms every quarter, a process we have now completed for the latest reporting period. The data we’ve gathered as a result gives us access to a wealth of collective knowledge based on these firms’ portfolio holdings as of June 28. In this article, we will use that wealth of knowledge to determine whether or not Cheniere Energy, Inc. (NYSEAMEX:LNG) makes for a good investment right now.

Cheniere Energy, Inc. (NYSEAMEX:LNG) was in 43 hedge funds’ portfolios at the end of June. LNG has experienced a decrease in support from the world’s most elite money managers recently. There were 53 hedge funds in our database with LNG positions at the end of the previous quarter. Our calculations also showed that LNG isn’t among the 30 most popular stocks among hedge funds (view the video below).

Unlike some fund managers who are betting on Dow reaching 40000 in a year, our long-short investment strategy doesn’t rely on bull markets to deliver double digit returns. We only rely on hedge fund buy/sell signals. Let’s take a gander at the latest hedge fund action encompassing Cheniere Energy, Inc. (NYSEAMEX:LNG).

What have hedge funds been doing with Cheniere Energy, Inc. (NYSEAMEX:LNG)?

At Q2’s end, a total of 43 of the hedge funds tracked by Insider Monkey were bullish on this stock, a change of -19% from the previous quarter. The graph below displays the number of hedge funds with bullish position in LNG over the last 16 quarters. With the smart money’s positions undergoing their usual ebb and flow, there exists a few key hedge fund managers who were adding to their holdings significantly (or already accumulated large positions). 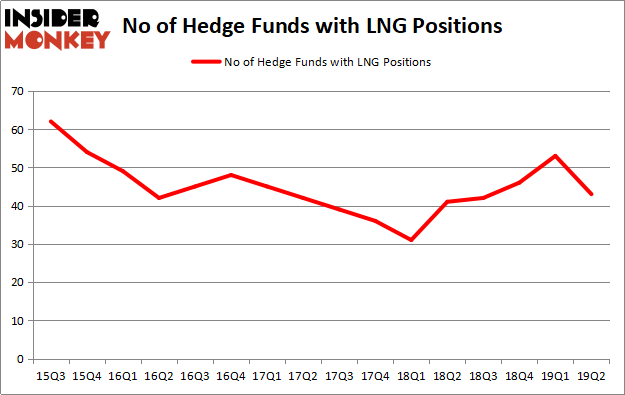 Of the funds tracked by Insider Monkey, Icahn Capital LP, managed by Carl Icahn, holds the number one position in Cheniere Energy, Inc. (NYSEAMEX:LNG). Icahn Capital LP has a $1.4775 billion position in the stock, comprising 5.6% of its 13F portfolio. Sitting at the No. 2 spot is Kensico Capital, managed by Michael Lowenstein, which holds a $786.1 million position; the fund has 14.3% of its 13F portfolio invested in the stock. Remaining members of the smart money that are bullish consist of Seth Klarman’s Baupost Group, Robert Pitts’s Steadfast Capital Management and Kevin Michael Ulrich and Anthony Davis’s Anchorage Advisors.

Seeing as Cheniere Energy, Inc. (NYSEAMEX:LNG) has witnessed bearish sentiment from the entirety of the hedge funds we track, it’s safe to say that there was a specific group of money managers who were dropping their full holdings by the end of the second quarter. Interestingly, Phill Gross and Robert Atchinson’s Adage Capital Management cut the biggest position of the “upper crust” of funds followed by Insider Monkey, comprising close to $63.4 million in stock. Matthew Knauer and Mina Faltas’s fund, Nokota Management, also dumped its stock, about $61.1 million worth. These transactions are important to note, as aggregate hedge fund interest was cut by 10 funds by the end of the second quarter.

As you can see these stocks had an average of 26.25 hedge funds with bullish positions and the average amount invested in these stocks was $1178 million. That figure was $4384 million in LNG’s case. Restaurant Brands International Inc (NYSE:QSR) is the most popular stock in this table. On the other hand ResMed Inc. (NYSE:RMD) is the least popular one with only 10 bullish hedge fund positions. Compared to these stocks Cheniere Energy, Inc. (NYSEAMEX:LNG) is more popular among hedge funds. Our calculations showed that top 20 most popular stocks among hedge funds returned 24.4% in 2019 through September 30th and outperformed the S&P 500 ETF (SPY) by 4 percentage points. Unfortunately LNG wasn’t nearly as popular as these 20 stocks and hedge funds that were betting on LNG were disappointed as the stock returned -7.9% during the third quarter and underperformed the market. If you are interested in investing in large cap stocks with huge upside potential, you should check out the top 20 most popular stocks among hedge funds as many of these stocks already outperformed the market in Q3.