Is Charter Communications, Inc. (CHTR) A Good Stock To Buy According To Hedge Funds?

Is Charter Communications, Inc. (NASDAQ:CHTR) going to take off soon? Investors who are in the know are in a relatively pessimistic mood. The number of long hedge fund bets were trimmed by 1 in recent months. Hedge fund sentiment towards the stock is 50% below its 2016 peak when the stock was wildly popular. Our calculations also showed that CHTR isn’t among the 30 most popular stocks among hedge funds. However, this doesn’t necessarily mean that hedge funds are actually bearish about CHTR.

Unlike some fund managers who are betting on Dow reaching 40000 in a year, our long-short investment strategy doesn’t rely on bull markets to deliver double digit returns. We only rely on hedge fund buy/sell signals. We’re going to go over the fresh hedge fund action surrounding Charter Communications, Inc. (NASDAQ:CHTR).

What have hedge funds been doing with Charter Communications, Inc. (NASDAQ:CHTR)?

At the end of the second quarter, a total of 66 of the hedge funds tracked by Insider Monkey were long this stock, a change of -1% from one quarter earlier. Below, you can check out the change in hedge fund sentiment towards CHTR over the last 16 quarters. So, let’s review which hedge funds were among the top holders of the stock and which hedge funds were making big moves. 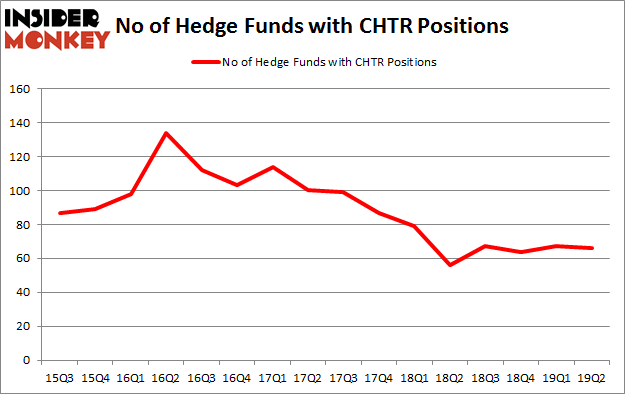 The largest stake in Charter Communications, Inc. (NASDAQ:CHTR) was held by Berkshire Hathaway, which reported holding $2144.5 million worth of stock at the end of March. It was followed by Egerton Capital Limited with a $1141.9 million position. Other investors bullish on the company included First Pacific Advisors LLC, AltaRock Partners, and Deccan Value Advisors.

Since Charter Communications, Inc. (NASDAQ:CHTR) has faced a decline in interest from the aggregate hedge fund industry, logic holds that there exists a select few funds who sold off their full holdings heading into Q3. Intriguingly, Jonathon Jacobson’s Highfields Capital Management dropped the largest investment of the “upper crust” of funds monitored by Insider Monkey, valued at an estimated $128.4 million in stock, and Gil Simon’s SoMa Equity Partners was right behind this move, as the fund sold off about $52 million worth. These bearish behaviors are intriguing to say the least, as total hedge fund interest dropped by 1 funds heading into Q3.

Let’s now take a look at hedge fund activity in other stocks – not necessarily in the same industry as Charter Communications, Inc. (NASDAQ:CHTR) but similarly valued. We will take a look at Banco Santander (Brasil) SA (NYSE:BSBR), United Parcel Service, Inc. (NYSE:UPS), Gilead Sciences, Inc. (NASDAQ:GILD), and U.S. Bancorp (NYSE:USB). All of these stocks’ market caps are closest to CHTR’s market cap.

As you can see these stocks had an average of 35.75 hedge funds with bullish positions and the average amount invested in these stocks was $3218 million. That figure was $7511 million in CHTR’s case. Gilead Sciences, Inc. (NASDAQ:GILD) is the most popular stock in this table. On the other hand Banco Santander (Brasil) SA (NYSE:BSBR) is the least popular one with only 11 bullish hedge fund positions. Compared to these stocks Charter Communications, Inc. (NASDAQ:CHTR) is more popular among hedge funds which is bullish sign. Our calculations showed that top 20 most popular stocks among hedge funds returned 24.4% in 2019 through September 30th and outperformed the S&P 500 ETF (SPY) by 4 percentage points. Hedge funds were also right about betting on CHTR, though not to the same extent, as the stock returned 4.3% during the third quarter and outperformed the market as well.