Is CFX A Good Stock To Buy Now?

Most investors tend to think that hedge funds and other asset managers are worthless, as they cannot beat even simple index fund portfolios. In fact, most people expect hedge funds to compete with and outperform the bull market that we have witnessed in recent years. However, hedge funds are generally partially hedged and aim at delivering attractive risk-adjusted returns rather than following the ups and downs of equity markets hoping that they will outperform the broader market. Our research shows that certain hedge funds do have great stock picking skills (and we can identify these hedge funds in advance pretty accurately), so let’s take a glance at the smart money sentiment towards Colfax Corporation (NYSE:CFX).

Is CFX a good stock to buy now? Colfax Corporation (NYSE:CFX) shareholders have witnessed an increase in enthusiasm from smart money in recent months. Colfax Corporation (NYSE:CFX) was in 45 hedge funds’ portfolios at the end of the third quarter of 2020. The all time high for this statistic is 43. This means the bullish number of hedge fund positions in this stock currently sits at its all time high. There were 39 hedge funds in our database with CFX positions at the end of the second quarter. Our calculations also showed that CFX isn’t among the 30 most popular stocks among hedge funds (click for Q3 rankings and see the video for a quick look at the top 5 stocks).

If you’d ask most shareholders, hedge funds are assumed to be worthless, old investment vehicles of yesteryear. While there are over 8000 funds in operation at the moment, Our experts look at the top tier of this group, around 850 funds. Most estimates calculate that this group of people orchestrate most of the smart money’s total capital, and by tracking their unrivaled investments, Insider Monkey has deciphered several investment strategies that have historically outrun the market. Insider Monkey’s flagship short hedge fund strategy beat the S&P 500 short ETFs by around 20 percentage points annually since its inception in March 2017. Our portfolio of short stocks lost 13% since February 2017 (through November 17th) even though the market was up 65% during the same period. We just shared a list of 6 short targets in our latest quarterly update .

At Insider Monkey we leave no stone unturned when looking for the next great investment idea. For example, the House passed a landmark bill decriminalizing marijuana. So, we are checking out this cannabis tech stock right now. We go through lists like the 15 best blue chip stocks to buy to pick the best large-cap stocks to buy. Even though we recommend positions in only a tiny fraction of the companies we analyze, we check out as many stocks as we can. We read hedge fund investor letters and listen to stock pitches at hedge fund conferences. You can subscribe to our free daily newsletter on our website. With all of this in mind let’s take a glance at the fresh hedge fund action regarding Colfax Corporation (NYSE:CFX).

Do Hedge Funds Think CFX Is A Good Stock To Buy Now? 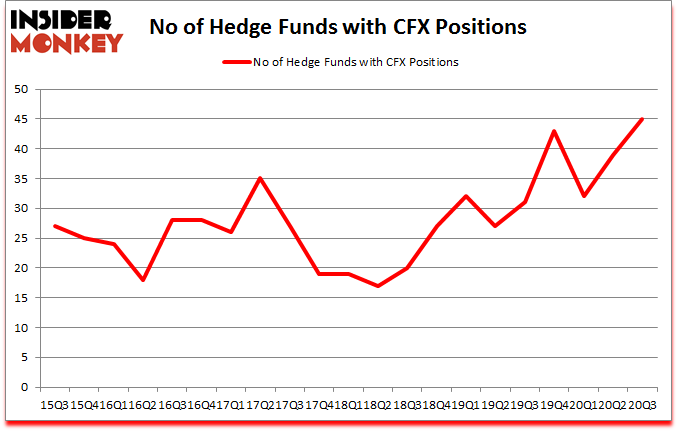 More specifically, Diamond Hill Capital was the largest shareholder of Colfax Corporation (NYSE:CFX), with a stake worth $110.3 million reported as of the end of September. Trailing Diamond Hill Capital was Cardinal Capital, which amassed a stake valued at $85.7 million. Royce & Associates, Citadel Investment Group, and Highbridge Capital Management were also very fond of the stock, becoming one of the largest hedge fund holders of the company. In terms of the portfolio weights assigned to each position Cove Street Capital allocated the biggest weight to Colfax Corporation (NYSE:CFX), around 4.64% of its 13F portfolio. Cardinal Capital is also relatively very bullish on the stock, designating 3.58 percent of its 13F equity portfolio to CFX.

As industrywide interest jumped, specific money managers have been driving this bullishness. Balyasny Asset Management, managed by Dmitry Balyasny, initiated the most outsized position in Colfax Corporation (NYSE:CFX). Balyasny Asset Management had $31.6 million invested in the company at the end of the quarter. Charles Davidson and Joseph Jacobs’s Wexford Capital also made a $6.7 million investment in the stock during the quarter. The other funds with brand new CFX positions are Brian Sheehy’s Iszo Capital, Ian Simm’s Impax Asset Management, and Joe DiMenna’s ZWEIG DIMENNA PARTNERS.

As you can see these stocks had an average of 21.6 hedge funds with bullish positions and the average amount invested in these stocks was $394 million. That figure was $757 million in CFX’s case. Amicus Therapeutics, Inc. (NASDAQ:FOLD) is the most popular stock in this table. On the other hand Ternium S.A. (NYSE:TX) is the least popular one with only 8 bullish hedge fund positions. Compared to these stocks Colfax Corporation (NYSE:CFX) is more popular among hedge funds. Our overall hedge fund sentiment score for CFX is 90. Stocks with higher number of hedge fund positions relative to other stocks as well as relative to their historical range receive a higher sentiment score. Our calculations showed that top 20 most popular stocks among hedge funds returned 41.3% in 2019 and outperformed the S&P 500 ETF (SPY) by 10 percentage points. These stocks returned 32.9% in 2020 through December 8th but still managed to beat the market by 16.2 percentage points. Hedge funds were also right about betting on CFX as the stock returned 20% since the end of September (through 12/8) and outperformed the market by an even larger margin. Hedge funds were clearly right about piling into this stock relative to other stocks with similar market capitalizations.