Is Central Puerto S.A. (CEPU) A Good Stock To Buy?

Is Central Puerto S.A. (NYSE:CEPU) a good place to invest some of your money right now? We can gain invaluable insight to help us answer that question by studying the investment trends of top investors, who employ world-class Ivy League graduates, who are given immense resources and industry contacts to put their financial expertise to work. The top picks of these firms have historically outperformed the market when we account for known risk factors, making them very valuable investment ideas.

Central Puerto S.A. (NYSE:CEPU) investors should pay attention to a decrease in hedge fund sentiment lately. Our calculations also showed that CEPU isn’t among the 30 most popular stocks among hedge funds.

In today’s marketplace there are several indicators stock traders can use to analyze publicly traded companies. Some of the most useful indicators are hedge fund and insider trading signals. We have shown that, historically, those who follow the best picks of the top fund managers can trounce their index-focused peers by a solid margin (see the details here).

What have hedge funds been doing with Central Puerto S.A. (NYSE:CEPU)? 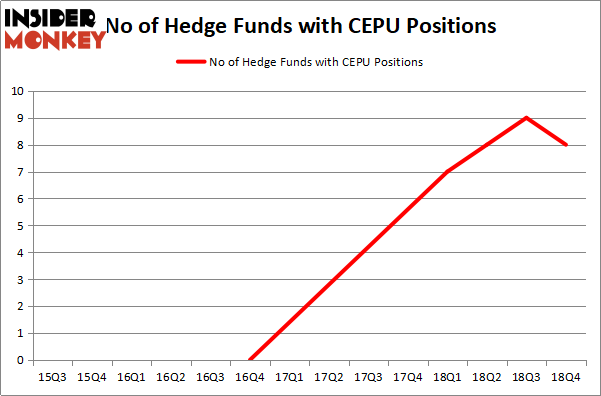 Because Central Puerto S.A. (NYSE:CEPU) has faced falling interest from the entirety of the hedge funds we track, logic holds that there was a specific group of hedgies who sold off their entire stakes last quarter. Interestingly, Paul Marshall and Ian Wace’s Marshall Wace LLP said goodbye to the biggest stake of the 700 funds monitored by Insider Monkey, totaling about $4.2 million in stock, and Dmitry Balyasny’s Balyasny Asset Management was right behind this move, as the fund cut about $2.7 million worth. These bearish behaviors are interesting, as aggregate hedge fund interest fell by 1 funds last quarter.

As you can see these stocks had an average of 11.75 hedge funds with bullish positions and the average amount invested in these stocks was $120 million. That figure was $34 million in CEPU’s case. Advanced Drainage Systems, Inc. (NYSE:WMS) is the most popular stock in this table. On the other hand Kiniksa Pharmaceuticals, Ltd. (NASDAQ:KNSA) is the least popular one with only 8 bullish hedge fund positions. Compared to these stocks Central Puerto S.A. (NYSE:CEPU) is even less popular than KNSA. Hedge funds dodged a bullet by taking a bearish stance towards CEPU. Our calculations showed that the top 15 most popular hedge fund stocks returned 24.2% through April 22nd and outperformed the S&P 500 ETF (SPY) by more than 7 percentage points. Unfortunately CEPU wasn’t nearly as popular as these 15 stock (hedge fund sentiment was very bearish); CEPU investors were disappointed as the stock returned -9.8% and underperformed the market. If you are interested in investing in large cap stocks with huge upside potential, you should check out the top 15 most popular stocks) among hedge funds as 13 of these stocks already outperformed the market this year.