The Insider Monkey team has completed processing the quarterly 13F filings for the June quarter submitted by the hedge funds and other money managers included in our extensive database. Most hedge fund investors experienced strong gains on the back of a strong market performance, which certainly propelled them to adjust their equity holdings so as to maintain the desired risk profile. As a result, the relevancy of these public filings and their content is indisputable, as they may reveal numerous high-potential stocks. The following article will discuss the smart money sentiment towards Central European Media Enterprises Ltd. (NASDAQ:CETV).

Central European Media Enterprises Ltd. (NASDAQ:CETV) was in 8 hedge funds’ portfolios at the end of the second quarter of 2019. CETV investors should be aware of an increase in activity from the world’s largest hedge funds of late. There were 7 hedge funds in our database with CETV positions at the end of the previous quarter. Our calculations also showed that CETV isn’t among the 30 most popular stocks among hedge funds (see the video below). 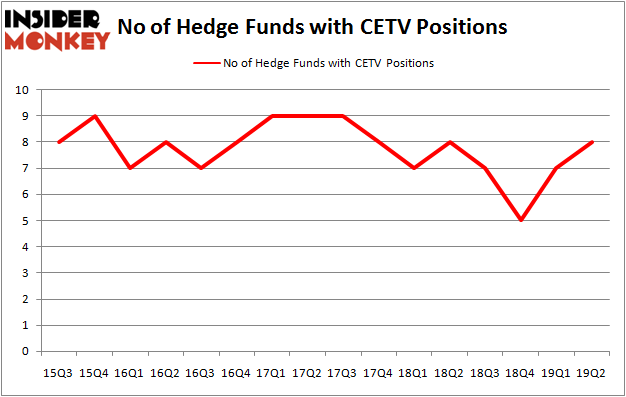 At the end of the second quarter, a total of 8 of the hedge funds tracked by Insider Monkey were long this stock, a change of 14% from the first quarter of 2019. Below, you can check out the change in hedge fund sentiment towards CETV over the last 16 quarters. So, let’s examine which hedge funds were among the top holders of the stock and which hedge funds were making big moves.

More specifically, D E Shaw was the largest shareholder of Central European Media Enterprises Ltd. (NASDAQ:CETV), with a stake worth $3 million reported as of the end of March. Trailing D E Shaw was Marshall Wace LLP, which amassed a stake valued at $2.5 million. Tudor Investment Corp, Renaissance Technologies, and Two Sigma Advisors were also very fond of the stock, giving the stock large weights in their portfolios.

As aggregate interest increased, key money managers have been driving this bullishness. Renaissance Technologies, assembled the biggest position in Central European Media Enterprises Ltd. (NASDAQ:CETV). Renaissance Technologies had $0.9 million invested in the company at the end of the quarter. Roger Ibbotson’s Zebra Capital Management also initiated a $0.6 million position during the quarter. The other funds with new positions in the stock are Israel Englander’s Millennium Management and Michael Gelband’s ExodusPoint Capital.

As you can see these stocks had an average of 16.5 hedge funds with bullish positions and the average amount invested in these stocks was $212 million. That figure was $10 million in CETV’s case. Office Depot Inc (NASDAQ:ODP) is the most popular stock in this table. On the other hand Meta Financial Group Inc. (NASDAQ:CASH) is the least popular one with only 12 bullish hedge fund positions. Compared to these stocks Central European Media Enterprises Ltd. (NASDAQ:CETV) is even less popular than CASH. Our calculations showed that top 20 most popular stocks among hedge funds returned 24.4% in 2019 through September 30th and outperformed the S&P 500 ETF (SPY) by 4 percentage points. A small number of hedge funds were also right about betting on CETV, though not to the same extent, as the stock returned 3.2% during the third quarter and outperformed the market as well.