Is CECO Environmental Corp. (CECE) A Good Stock To Buy?

The elite funds run by legendary investors such as David Tepper and Dan Loeb make hundreds of millions of dollars for themselves and their investors by spending enormous resources doing research on small cap stocks that big investment banks don’t follow. Because of their pay structures, they have strong incentives to do the research necessary to beat the market. That’s why we pay close attention to what they think in small cap stocks. In this article, we take a closer look at CECO Environmental Corp. (NASDAQ:CECE) from the perspective of those elite funds.

CECO Environmental Corp. (NASDAQ:CECE) was in 12 hedge funds’ portfolios at the end of June. CECE shareholders have witnessed a decrease in activity from the world’s largest hedge funds recently. There were 14 hedge funds in our database with CECE positions at the end of the previous quarter. Our calculations also showed that CECE isn’t among the 30 most popular stocks among hedge funds (see the video below).

In addition to following the biggest hedge funds for investment ideas, we also share stock pitches from conferences, investor letters and other sources  like this one where the fund manager is talking about two under the radar 1000% return potential stocks: first one in internet infrastructure and the second in the heart of advertising market. We use hedge fund buy/sell signals to determine whether to conduct in-depth analysis of these stock ideas which take days. Let’s take a gander at the key hedge fund action regarding CECO Environmental Corp. (NASDAQ:CECE).

What have hedge funds been doing with CECO Environmental Corp. (NASDAQ:CECE)?

Heading into the third quarter of 2019, a total of 12 of the hedge funds tracked by Insider Monkey were bullish on this stock, a change of -14% from the previous quarter. The graph below displays the number of hedge funds with bullish position in CECE over the last 16 quarters. So, let’s check out which hedge funds were among the top holders of the stock and which hedge funds were making big moves. 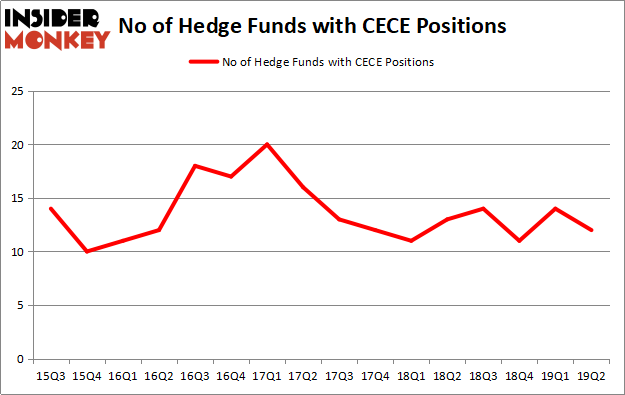 When looking at the institutional investors followed by Insider Monkey, Trigran Investments, managed by Douglas T. Granat, holds the largest position in CECO Environmental Corp. (NASDAQ:CECE). Trigran Investments has a $44.7 million position in the stock, comprising 7.4% of its 13F portfolio. The second largest stake is held by Renaissance Technologies, with a $2.8 million position; the fund has less than 0.1%% of its 13F portfolio invested in the stock. Some other members of the smart money with similar optimism consist of Peter Rathjens, Bruce Clarke and John Campbell’s Arrowstreet Capital, D. E. Shaw’s D E Shaw and David P. Cohen’s Minerva Advisors.

Due to the fact that CECO Environmental Corp. (NASDAQ:CECE) has faced bearish sentiment from the smart money, it’s easy to see that there was a specific group of hedge funds that slashed their entire stakes heading into Q3. At the top of the heap, Israel Englander’s Millennium Management cut the biggest position of the “upper crust” of funds monitored by Insider Monkey, valued at an estimated $0.4 million in stock, and Paul Marshall and Ian Wace’s Marshall Wace LLP was right behind this move, as the fund sold off about $0.2 million worth. These bearish behaviors are important to note, as aggregate hedge fund interest dropped by 2 funds heading into Q3.

As you can see these stocks had an average of 4.25 hedge funds with bullish positions and the average amount invested in these stocks was $13 million. That figure was $55 million in CECE’s case. Amyris Inc (NASDAQ:AMRS) is the most popular stock in this table. On the other hand Peoples Financial Services Corp. (NASDAQ:PFIS) is the least popular one with only 1 bullish hedge fund positions. Compared to these stocks CECO Environmental Corp. (NASDAQ:CECE) is more popular among hedge funds. Our calculations showed that top 20 most popular stocks among hedge funds returned 24.4% in 2019 through September 30th and outperformed the S&P 500 ETF (SPY) by 4 percentage points. Unfortunately CECE wasn’t nearly as popular as these 20 stocks and hedge funds that were betting on CECE were disappointed as the stock returned -27.1% during the third quarter and underperformed the market. If you are interested in investing in large cap stocks with huge upside potential, you should check out the top 20 most popular stocks among hedge funds as many of these stocks already outperformed the market in Q3.