Is CDW Corporation (CDW) A Good Stock To Buy?

Is CDW Corporation (NASDAQ:CDW) a good investment right now? We check hedge fund and billionaire investor sentiment before delving into hours of research. Hedge funds spend millions of dollars on Ivy League graduates, expert networks, and get tips from investment bankers and industry insiders. Sure they sometimes fail miserably, but their consensus stock picks historically outperformed the market after adjusting for known risk factors.

CDW Corporation (NASDAQ:CDW) investors should pay attention to an increase in activity from the world’s largest hedge funds in recent months. CDW was in 29 hedge funds’ portfolios at the end of June. There were 28 hedge funds in our database with CDW positions at the end of the previous quarter. Our calculations also showed that CDW isn’t among the 30 most popular stocks among hedge funds  (view the video below).

In the eyes of most traders, hedge funds are perceived as worthless, old investment tools of the past. While there are greater than 8000 funds trading at present, We hone in on the top tier of this club, around 750 funds. These money managers direct the lion’s share of the smart money’s total capital, and by watching their top picks, Insider Monkey has unearthed a few investment strategies that have historically surpassed Mr. Market. Insider Monkey’s flagship hedge fund strategy beat the S&P 500 index by around 5 percentage points a year since its inception in May 2014. We were able to generate large returns even by identifying short candidates. Our portfolio of short stocks lost 25.7% since February 2017 (through September 30th) even though the market was up more than 33% during the same period. We just shared a list of 10 short targets in our latest quarterly update . 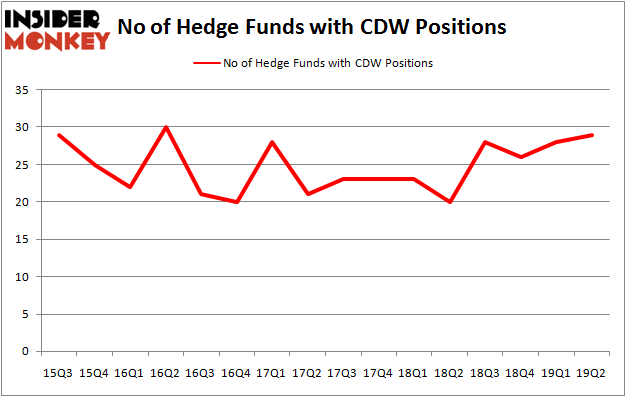 Unlike some fund managers who are betting on Dow reaching 40000 in a year, our long-short investment strategy doesn’t rely on bull markets to deliver double digit returns. We only rely on hedge fund buy/sell signals. We’re going to take a look at the recent hedge fund action regarding CDW Corporation (NASDAQ:CDW).

At the end of the second quarter, a total of 29 of the hedge funds tracked by Insider Monkey held long positions in this stock, a change of 4% from the first quarter of 2019. On the other hand, there were a total of 20 hedge funds with a bullish position in CDW a year ago. With hedge funds’ sentiment swirling, there exists a select group of notable hedge fund managers who were increasing their holdings significantly (or already accumulated large positions).

Of the funds tracked by Insider Monkey, Select Equity Group, managed by Robert Joseph Caruso, holds the number one position in CDW Corporation (NASDAQ:CDW). Select Equity Group has a $482.6 million position in the stock, comprising 3.3% of its 13F portfolio. The second largest stake is held by AQR Capital Management, managed by Cliff Asness, which holds a $330.2 million position; the fund has 0.4% of its 13F portfolio invested in the stock. Some other professional money managers with similar optimism include Thomas Bancroft’s Makaira Partners, Noam Gottesman’s GLG Partners and Peter Rathjens, Bruce Clarke and John Campbell’s Arrowstreet Capital.

As one would reasonably expect, specific money managers were leading the bulls’ herd. ExodusPoint Capital, managed by Michael Gelband, initiated the largest position in CDW Corporation (NASDAQ:CDW). ExodusPoint Capital had $0.9 million invested in the company at the end of the quarter. Hoon Kim’s Quantinno Capital also initiated a $0.4 million position during the quarter. The other funds with new positions in the stock are David Andre and Astro Teller’s Cerebellum Capital, Mike Vranos’s Ellington, and Bruce Kovner’s Caxton Associates LP.

As you can see these stocks had an average of 22.75 hedge funds with bullish positions and the average amount invested in these stocks was $633 million. That figure was $1244 million in CDW’s case. Equifax Inc. (NYSE:EFX) is the most popular stock in this table. On the other hand SK Telecom Co., Ltd. (NYSE:SKM) is the least popular one with only 7 bullish hedge fund positions. CDW Corporation (NASDAQ:CDW) is not the most popular stock in this group but hedge fund interest is still above average. Our calculations showed that top 20 most popular stocks among hedge funds returned 24.4% in 2019 through September 30th and outperformed the S&P 500 ETF (SPY) by 4 percentage points. Hedge funds were also right about betting on CDW as the stock returned 11.3% during the third quarter and outperformed the market. Hedge funds were rewarded for their relative bullishness.