The latest 13F reporting period has come and gone, and Insider Monkey is again at the forefront when it comes to making use of this gold mine of data. Insider Monkey finished processing more than 730 13F filings submitted by hedge funds and prominent investors. These filings show these funds’ portfolio positions as of June 28th, 2019. In this article we are going to take a look at smart money sentiment towards Casella Waste Systems Inc. (NASDAQ:CWST).

Casella Waste Systems Inc. (NASDAQ:CWST) was in 12 hedge funds’ portfolios at the end of June. CWST investors should pay attention to a decrease in activity from the world’s largest hedge funds of late. There were 14 hedge funds in our database with CWST positions at the end of the previous quarter. Our calculations also showed that CWST isn’t among the 30 most popular stocks among hedge funds (see the video below). 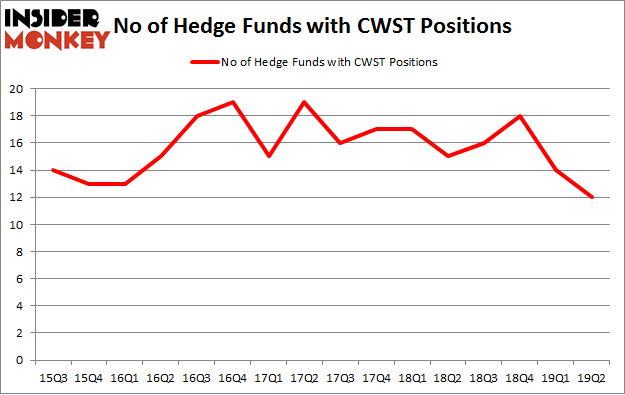 More specifically, Renaissance Technologies was the largest shareholder of Casella Waste Systems Inc. (NASDAQ:CWST), with a stake worth $120.4 million reported as of the end of March. Trailing Renaissance Technologies was Two Sigma Advisors, which amassed a stake valued at $12.5 million. Portolan Capital Management, Driehaus Capital, and GAMCO Investors were also very fond of the stock, giving the stock large weights in their portfolios.

Since Casella Waste Systems Inc. (NASDAQ:CWST) has witnessed falling interest from the smart money, it’s easy to see that there is a sect of hedgies that elected to cut their entire stakes by the end of the second quarter. Interestingly, Ian Simm’s Impax Asset Management dumped the largest position of the 750 funds monitored by Insider Monkey, comprising about $4.8 million in stock, and Peter Rathjens, Bruce Clarke and John Campbell’s Arrowstreet Capital was right behind this move, as the fund cut about $4.6 million worth. These moves are important to note, as aggregate hedge fund interest was cut by 2 funds by the end of the second quarter.

As you can see these stocks had an average of 15.75 hedge funds with bullish positions and the average amount invested in these stocks was $182 million. That figure was $174 million in CWST’s case. Tronox Holdings plc (NYSE:TROX) is the most popular stock in this table. On the other hand Focus Financial Partners Inc. (NASDAQ:FOCS) is the least popular one with only 9 bullish hedge fund positions. Casella Waste Systems Inc. (NASDAQ:CWST) is not the least popular stock in this group but hedge fund interest is still below average. Our calculations showed that top 20 most popular stocks among hedge funds returned 24.4% in 2019 through September 30th and outperformed the S&P 500 ETF (SPY) by 4 percentage points. A small number of hedge funds were also right about betting on CWST as the stock returned 8.4% during the same time frame and outperformed the market by an even larger margin.