Our extensive research has shown that imitating the smart money can generate significant returns for retail investors, which is why we track more than 700 prominent money managers and analyze their quarterly 13F filings. The stocks that are heavily bought by hedge funds historically outperformed the market, though there is no shortage of high profile failures like hedge funds’ recent losses in Facebook. Let’s take a closer look at what the funds we track think about Carrols Restaurant Group, Inc. (NASDAQ:TAST) in this article.

Carrols Restaurant Group, Inc. (NASDAQ:TAST) was in 20 hedge funds’ portfolios at the end of September. TAST investors should pay attention to a decrease in hedge fund interest lately. There were 21 hedge funds in our database with TAST holdings at the end of the previous quarter. Our calculations also showed that TAST isn’t among the 30 most popular stocks among hedge funds.

How have hedgies been trading Carrols Restaurant Group, Inc. (NASDAQ:TAST)?

Heading into the fourth quarter of 2018, a total of 20 of the hedge funds tracked by Insider Monkey were bullish on this stock, a change of -5% from the previous quarter. By comparison, 15 hedge funds held shares or bullish call options in TAST heading into this year. With the smart money’s capital changing hands, there exists a few key hedge fund managers who were upping their holdings considerably (or already accumulated large positions). 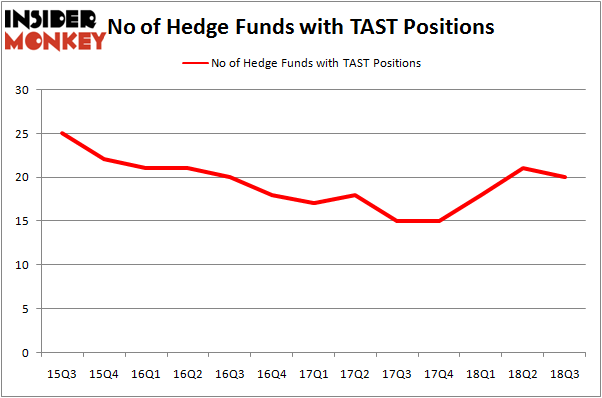 More specifically, Private Capital Management was the largest shareholder of Carrols Restaurant Group, Inc. (NASDAQ:TAST), with a stake worth $28.2 million reported as of the end of September. Trailing Private Capital Management was Cannell Capital, which amassed a stake valued at $18.7 million. Renaissance Technologies, Cove Street Capital, and Royce & Associates were also very fond of the stock, giving the stock large weights in their portfolios.

Seeing as Carrols Restaurant Group, Inc. (NASDAQ:TAST) has experienced bearish sentiment from the smart money, it’s safe to say that there is a sect of fund managers that decided to sell off their positions entirely by the end of the third quarter. It’s worth mentioning that Richard Driehaus’s Driehaus Capital dropped the largest stake of the 700 funds tracked by Insider Monkey, comprising an estimated $7.6 million in stock, and Glenn Russell Dubin’s Highbridge Capital Management was right behind this move, as the fund dumped about $0.9 million worth. These bearish behaviors are important to note, as aggregate hedge fund interest dropped by 1 funds by the end of the third quarter.

As you can see these stocks had an average of 10 hedge funds with bullish positions and the average amount invested in these stocks was $75 million. That figure was $135 million in TAST’s case. Rigel Pharmaceuticals, Inc. (NASDAQ:RIGL) is the most popular stock in this table. On the other hand EMC Insurance Group Inc. (NASDAQ:EMCI) is the least popular one with only 2 bullish hedge fund positions. Compared to these stocks Carrols Restaurant Group, Inc. (NASDAQ:TAST) is more popular among hedge funds. Considering that hedge funds are fond of this stock in relation to its market cap peers, it may be a good idea to analyze it in detail and potentially include it in your portfolio.