The first quarter was a breeze as Powell pivoted, and China seemed eager to reach a deal with Trump. Both the S&P 500 and Russell 2000 delivered very strong gains as a result, with the Russell 2000, which is composed of smaller companies, outperforming the large-cap stocks slightly during the first quarter. Unfortunately sentiment shifted in May and August as this time China pivoted and Trump put more pressure on China by increasing tariffs. Fourth quarter brought optimism to the markets and hedge funds’ top 20 stock picks performed spectacularly in this volatile environment. These stocks delivered a total gain of 37.4% through the end of November, vs. a gain of 27.5% for the S&P 500 ETF. In this article we will look at how this market volatility affected the sentiment of hedge funds towards Capital City Bank Group, Inc. (NASDAQ:CCBG), and what that likely means for the prospects of the company and its stock.

Hedge fund interest in Capital City Bank Group, Inc. (NASDAQ:CCBG) shares was flat at the end of last quarter. This is usually a negative indicator. At the end of this article we will also compare CCBG to other stocks including Sinovac Biotech Ltd. (NASDAQ:SVA), Stemline Therapeutics Inc (NASDAQ:STML), and Aurora Mobile Limited (NASDAQ:JG) to get a better sense of its popularity.

We leave no stone unturned when looking for the next great investment idea. For example Discover is offering this insane cashback card, so we look into shorting the stock. One of the most bullish analysts in America just put his money where his mouth is. He says, “I’m investing more today than I did back in early 2009.” So we check out his pitch. We read hedge fund investor letters and listen to stock pitches at hedge fund conferences. We even check out this option genius’ weekly trade ideas. This December, we recommended Adams Energy as a one-way bet based on an under-the-radar fund manager’s investor letter and the stock already gained 20 percent. Now let’s take a peek at the recent hedge fund action surrounding Capital City Bank Group, Inc. (NASDAQ:CCBG).

At the end of the third quarter, a total of 3 of the hedge funds tracked by Insider Monkey were bullish on this stock, a change of 0% from the second quarter of 2019. On the other hand, there were a total of 3 hedge funds with a bullish position in CCBG a year ago. With the smart money’s positions undergoing their usual ebb and flow, there exists a few noteworthy hedge fund managers who were increasing their stakes significantly (or already accumulated large positions). 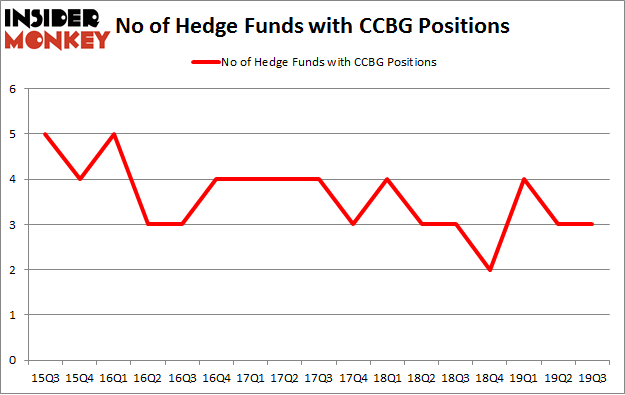 The largest stake in Capital City Bank Group, Inc. (NASDAQ:CCBG) was held by Renaissance Technologies, which reported holding $6.6 million worth of stock at the end of September. It was followed by Millennium Management with a $1.6 million position. The only other hedge fund that is bullish on the company was Royce & Associates.

As you can see these stocks had an average of 6.25 hedge funds with bullish positions and the average amount invested in these stocks was $59 million. That figure was $9 million in CCBG’s case. Stemline Therapeutics Inc (NASDAQ:STML) is the most popular stock in this table. On the other hand Aurora Mobile Limited (NASDAQ:JG) is the least popular one with only 1 bullish hedge fund positions. Capital City Bank Group, Inc. (NASDAQ:CCBG) is not the least popular stock in this group but hedge fund interest is still below average. This is a slightly negative signal and we’d rather spend our time researching stocks that hedge funds are piling on. Our calculations showed that top 20 most popular stocks among hedge funds returned 37.4% in 2019 through the end of November and outperformed the S&P 500 ETF (SPY) by 9.9 percentage points. Unfortunately CCBG wasn’t nearly as popular as these 20 stocks (hedge fund sentiment was quite bearish); CCBG investors were disappointed as the stock returned 5.4% during the first two months of the fourth quarter and underperformed the market. If you are interested in investing in large cap stocks with huge upside potential, you should check out the top 20 most popular stocks among hedge funds as 70 percent of these stocks already outperformed the market in Q4.

Is Mereo BioPharma Group plc (MREO) A Good Stock To Buy?
Monthly Newsletter Strategy
Download a free copy of our newsletter and see the details inside!
Hedge Fund Resource Center
Related News
Insider Buying Metric Points to 5 Stocks Poised to Rise by Year’s End Do Hedge Funds and Insiders Love Guaranty Bancorp (GBNK)? 11 Companies That Caught Lying To The Public, Deceived Customers 10 Countries with the Highest Coffee Consumption in the World 10 Stocks That Went Up During The 2008 Crash
Billionaire Hedge Funds