Is Cantel Medical Corp. (CMD) A Good Stock To Buy ?

Cantel Medical Corp. (NYSE:CMD) investors should be aware of a decrease in activity from the world’s largest hedge funds lately. CMD was in 13 hedge funds’ portfolios at the end of the fourth quarter of 2018. There were 23 hedge funds in our database with CMD holdings at the end of the previous quarter. Our calculations also showed that cmd isn’t among the 30 most popular stocks among hedge funds.

Today there are many signals stock market investors have at their disposal to appraise stocks. Some of the less known signals are hedge fund and insider trading sentiment. We have shown that, historically, those who follow the best picks of the top fund managers can beat the market by a solid margin (see the details here).

How have hedgies been trading Cantel Medical Corp. (NYSE:CMD)?

At Q4’s end, a total of 13 of the hedge funds tracked by Insider Monkey held long positions in this stock, a change of -43% from one quarter earlier. On the other hand, there were a total of 12 hedge funds with a bullish position in CMD a year ago. With hedge funds’ positions undergoing their usual ebb and flow, there exists a select group of key hedge fund managers who were adding to their stakes substantially (or already accumulated large positions). 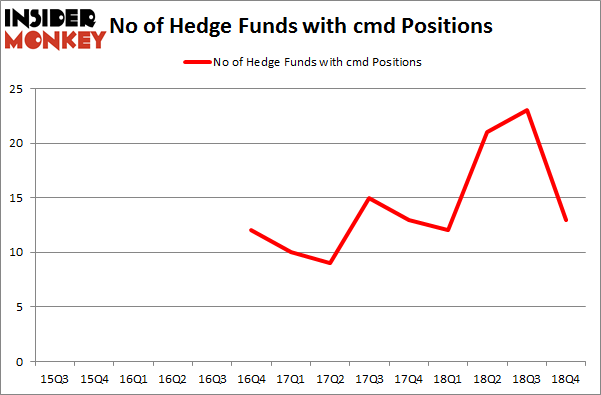 The largest stake in Cantel Medical Corp. (NYSE:CMD) was held by Diker Management, which reported holding $102.6 million worth of stock at the end of September. It was followed by Impax Asset Management with a $33.9 million position. Other investors bullish on the company included Millennium Management, Marshall Wace LLP, and AQR Capital Management.

Seeing as Cantel Medical Corp. (NYSE:CMD) has experienced a decline in interest from the aggregate hedge fund industry, we can see that there were a few money managers who sold off their entire stakes heading into Q3. Intriguingly, Peter Rathjens, Bruce Clarke and John Campbell’s Arrowstreet Capital cut the largest position of the 700 funds tracked by Insider Monkey, valued at an estimated $9 million in stock, and Michael Platt and William Reeves’s BlueCrest Capital Mgmt. was right behind this move, as the fund said goodbye to about $4.4 million worth. These transactions are interesting, as total hedge fund interest was cut by 10 funds heading into Q3.

As you can see these stocks had an average of 18.25 hedge funds with bullish positions and the average amount invested in these stocks was $222 million. That figure was $182 million in CMD’s case. BankUnited, Inc. (NYSE:BKU) is the most popular stock in this table. On the other hand RLI Corp. (NYSE:RLI) is the least popular one with only 12 bullish hedge fund positions. Cantel Medical Corp. (NYSE:CMD) is not the least popular stock in this group but hedge fund interest is still below average. This is a slightly negative signal and we’d rather spend our time researching stocks that hedge funds are piling on. Our calculations showed that top 15 most popular stocks) among hedge funds returned 24.2% through April 22nd and outperformed the S&P 500 ETF (SPY) by more than 7 percentage points. Unfortunately CMD wasn’t nearly as popular as these 15 stock (hedge fund sentiment was quite bearish); CMD investors were disappointed as the stock returned -13.5% and underperformed the market. If you are interested in investing in large cap stocks with huge upside potential, you should check out the top 15 most popular stocks) among hedge funds as 13 of these stocks already outperformed the market this year.