Canada Goose Holdings Inc. (NYSE:GOOS) investors should be aware of an increase in hedge fund sentiment in recent months. Our calculations also showed that goos isn’t among the 30 most popular stocks among hedge funds.

How have hedgies been trading Canada Goose Holdings Inc. (NYSE:GOOS)?

At Q4’s end, a total of 29 of the hedge funds tracked by Insider Monkey held long positions in this stock, a change of 61% from the previous quarter. By comparison, 20 hedge funds held shares or bullish call options in GOOS a year ago. With hedge funds’ capital changing hands, there exists an “upper tier” of notable hedge fund managers who were adding to their stakes significantly (or already accumulated large positions). 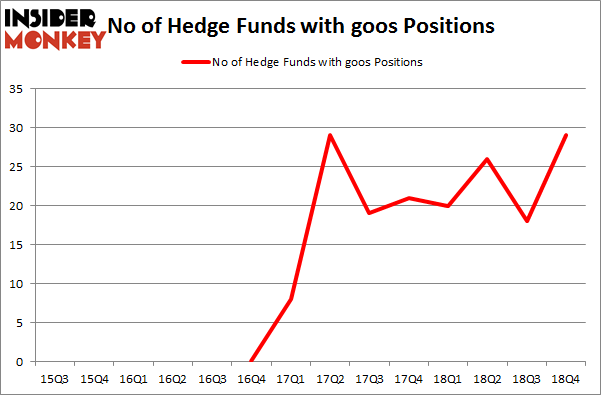 As one would reasonably expect, specific money managers have jumped into Canada Goose Holdings Inc. (NYSE:GOOS) headfirst. Key Square Capital Management, managed by Scott Bessent, initiated the most valuable position in Canada Goose Holdings Inc. (NYSE:GOOS). Key Square Capital Management had $39.3 million invested in the company at the end of the quarter. Benjamin A. Smith’s Laurion Capital Management also made a $34.3 million investment in the stock during the quarter. The following funds were also among the new GOOS investors: Larry Chen and Terry Zhang’s Tairen Capital, Mike Ogborne’s Ogborne Capital, and Steve Cohen’s Point72 Asset Management.

As you can see these stocks had an average of 26.75 hedge funds with bullish positions and the average amount invested in these stocks was $536 million. That figure was $175 million in GOOS’s case. Sinclair Broadcast Group, Inc. (NASDAQ:SBGI) is the most popular stock in this table. On the other hand Navistar International Corp (NYSE:NAV) is the least popular one with only 20 bullish hedge fund positions. Canada Goose Holdings Inc. (NYSE:GOOS) is not the most popular stock in this group but hedge fund interest is still above average. Our calculations showed that top 15 most popular stocks) among hedge funds returned 24.2% through April 22nd and outperformed the S&P 500 ETF (SPY) by more than 7 percentage points. Hedge funds were also right about betting on GOOS, though not to the same extent, as the stock returned 18.8% and outperformed the market as well.