Is Brooks Automation, Inc. (BRKS) A Good Stock To Buy?

Concerns over rising interest rates and expected further rate increases have hit several stocks hard during the fourth quarter. NASDAQ and Russell 2000 indices were already in correction territory. More importantly, Russell 2000 ETF (IWM) underperformed the larger S&P 500 ETF (SPY) by nearly 7 percentage points in the fourth quarter. Hedge funds and institutional investors tracked by Insider Monkey usually invest a disproportionate amount of their portfolios in smaller cap stocks. We have been receiving indications that hedge funds were paring back their overall exposure and this is one of the factors behind the recent movements in major indices. In this article, we will take a closer look at hedge fund sentiment towards Brooks Automation, Inc. (NASDAQ:BRKS).

Brooks Automation, Inc. (NASDAQ:BRKS) was in 9 hedge funds’ portfolios at the end of the fourth quarter of 2018. BRKS investors should be aware of a decrease in enthusiasm from smart money recently. There were 12 hedge funds in our database with BRKS positions at the end of the previous quarter. Our calculations also showed that brks isn’t among the 30 most popular stocks among hedge funds.

In today’s marketplace there are a multitude of tools stock traders use to value their stock investments. Two of the best tools are hedge fund and insider trading moves. Our researchers have shown that, historically, those who follow the best picks of the top hedge fund managers can outclass the market by a significant margin (see the details here).

Heading into the first quarter of 2019, a total of 9 of the hedge funds tracked by Insider Monkey held long positions in this stock, a change of -25% from the second quarter of 2018. The graph below displays the number of hedge funds with bullish position in BRKS over the last 14 quarters. With the smart money’s positions undergoing their usual ebb and flow, there exists an “upper tier” of key hedge fund managers who were increasing their stakes significantly (or already accumulated large positions). 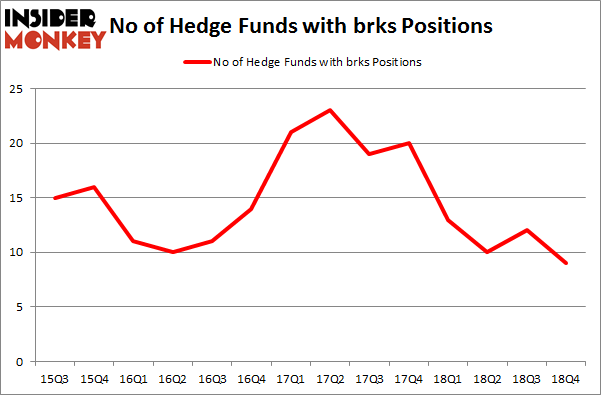 The largest stake in Brooks Automation, Inc. (NASDAQ:BRKS) was held by Royce & Associates, which reported holding $36.2 million worth of stock at the end of September. It was followed by Point72 Asset Management with a $13.5 million position. Other investors bullish on the company included Millennium Management, D E Shaw, and Voce Capital.

Judging by the fact that Brooks Automation, Inc. (NASDAQ:BRKS) has witnessed declining sentiment from the entirety of the hedge funds we track, we can see that there exists a select few fund managers that slashed their full holdings in the third quarter. Interestingly, Efrem Kamen’s Pura Vida Investments dumped the biggest investment of the “upper crust” of funds monitored by Insider Monkey, comprising an estimated $5.7 million in stock, and Cliff Asness’s AQR Capital Management was right behind this move, as the fund cut about $4.4 million worth. These bearish behaviors are interesting, as total hedge fund interest was cut by 3 funds in the third quarter.

As you can see these stocks had an average of 20.75 hedge funds with bullish positions and the average amount invested in these stocks was $247 million. That figure was $71 million in BRKS’s case. Patterson Companies, Inc. (NASDAQ:PDCO) is the most popular stock in this table. On the other hand Itron, Inc. (NASDAQ:ITRI) is the least popular one with only 14 bullish hedge fund positions. Compared to these stocks Brooks Automation, Inc. (NASDAQ:BRKS) is even less popular than ITRI. Our calculations showed that top 15 most popular stocks) among hedge funds returned 24.2% through April 22nd and outperformed the S&P 500 ETF (SPY) by more than 7 percentage points. A small number of hedge funds were also right about betting on BRKS, though not to the same extent, as the stock returned 21.2% and outperformed the market as well.