At Insider Monkey, we pore over the filings of nearly 750 top investment firms every quarter, a process we have now completed for the latest reporting period. The data we’ve gathered as a result gives us access to a wealth of collective knowledge based on these firms’ portfolio holdings as of June 28. In this article, we will use that wealth of knowledge to determine whether or not Brookline Bancorp, Inc. (NASDAQ:BRKL) makes for a good investment right now.

Brookline Bancorp, Inc. (NASDAQ:BRKL) was in 8 hedge funds’ portfolios at the end of June. BRKL investors should be aware of a decrease in support from the world’s most elite money managers of late. There were 9 hedge funds in our database with BRKL holdings at the end of the previous quarter. Our calculations also showed that BRKL isn’t among the 30 most popular stocks among hedge funds (see the video below).

To most stock holders, hedge funds are assumed to be slow, old financial tools of yesteryear. While there are greater than 8000 funds with their doors open at present, Our researchers hone in on the crème de la crème of this club, approximately 750 funds. It is estimated that this group of investors have their hands on the lion’s share of the hedge fund industry’s total asset base, and by keeping track of their inimitable equity investments, Insider Monkey has determined numerous investment strategies that have historically outrun the S&P 500 index. Insider Monkey’s flagship hedge fund strategy outstripped the S&P 500 index by around 5 percentage points annually since its inception in May 2014. We were able to generate large returns even by identifying short candidates. Our portfolio of short stocks lost 25.7% since February 2017 (through September 30th) even though the market was up more than 33% during the same period. We just shared a list of 10 short targets in our latest quarterly update .

What does smart money think about Brookline Bancorp, Inc. (NASDAQ:BRKL)?

At the end of the second quarter, a total of 8 of the hedge funds tracked by Insider Monkey were bullish on this stock, a change of -11% from the previous quarter. On the other hand, there were a total of 8 hedge funds with a bullish position in BRKL a year ago. With hedge funds’ positions undergoing their usual ebb and flow, there exists a select group of key hedge fund managers who were boosting their holdings substantially (or already accumulated large positions). 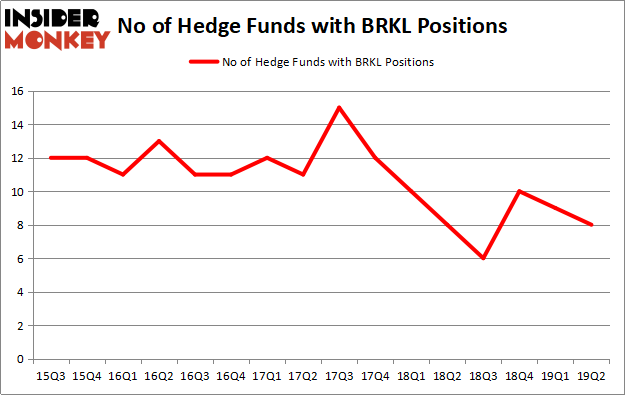 Among these funds, Renaissance Technologies held the most valuable stake in Brookline Bancorp, Inc. (NASDAQ:BRKL), which was worth $24.8 million at the end of the second quarter. On the second spot was Polaris Capital Management which amassed $17.6 million worth of shares. Moreover, Millennium Management, Citadel Investment Group, and Prospector Partners were also bullish on Brookline Bancorp, Inc. (NASDAQ:BRKL), allocating a large percentage of their portfolios to this stock.

Seeing as Brookline Bancorp, Inc. (NASDAQ:BRKL) has witnessed declining sentiment from the entirety of the hedge funds we track, it’s safe to say that there lies a certain “tier” of money managers that elected to cut their full holdings heading into Q3. It’s worth mentioning that Chuck Royce’s Royce & Associates cut the largest stake of the “upper crust” of funds tracked by Insider Monkey, totaling close to $3 million in stock. David Harding’s fund, Winton Capital Management, also dropped its stock, about $0.3 million worth. These moves are important to note, as aggregate hedge fund interest dropped by 1 funds heading into Q3.

As you can see these stocks had an average of 17 hedge funds with bullish positions and the average amount invested in these stocks was $139 million. That figure was $52 million in BRKL’s case. Epizyme Inc (NASDAQ:EPZM) is the most popular stock in this table. On the other hand Diamond Offshore Drilling Inc (NYSE:DO) is the least popular one with only 13 bullish hedge fund positions. Compared to these stocks Brookline Bancorp, Inc. (NASDAQ:BRKL) is even less popular than DO. Hedge funds dodged a bullet by taking a bearish stance towards BRKL. Our calculations showed that the top 20 most popular hedge fund stocks returned 24.4% in 2019 through September 30th and outperformed the S&P 500 ETF (SPY) by 4 percentage points. Unfortunately BRKL wasn’t nearly as popular as these 20 stocks (hedge fund sentiment was very bearish); BRKL investors were disappointed as the stock returned -3.5% during the third quarter and underperformed the market. If you are interested in investing in large cap stocks with huge upside potential, you should check out the top 20 most popular stocks among hedge funds as many of these stocks already outperformed the market so far in 2019.